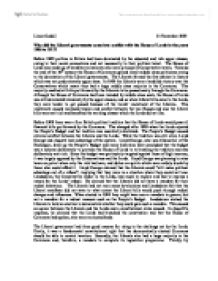 Why did the Liberal governments come into conflict with the House of Lords in the years 1906 to 1911?

Lizzie Godsill 21 November 2003 Why did the Liberal governments come into conflict with the House of Lords in the years 1906 to 1911? Before 1900 politics in Britain had been dominated by the educated and rich upper classes, owing to their social connections and not necessarily to their political talent. The House of Lords was made up of hereditary aristocrats who were principally Conservative voters. Towards the end of the 19th century the House of Commons gained many middle class politicians owing to the domination of the Liberal governments. The Liberals formed the first cabinet in history which was not predominantly upper class. In 1906 the Liberals won a landslide victory over the Conservatives which meant they had a huge middle class majority in the Commons. This majority enabled all bills put forward by the Liberals to be passed easily through the Commons. Although the House of Commons had been invaded by middle class seats, the House of Lords was still dominated intensively by the upper classes, and so when Liberal bills came to the Lords, they were harder to get passed because of the Lords' resentment of the Liberals. ...read more.

Lloyd George was planning to raise taxes on petrol when only the rich had cars, and duties on spirits which were widely drunk by those who could afford it. Lloyd George claimed that the Liberals could "still make political advantage out of a refusal", implying that they were in a situation where they could not lose. Landsdown, the Conservative leader in the Lords, had much to explain and had to express a reason for the Lords' refusal. He claimed that the Liberals did not have a mandate for their radical behaviour. The Liberals had not won many by-elections and Landsdown felt that the Liberal manifesto did not state to what extent the Liberal bills would push through radical changes and influences. When elected in 1906 they might have won a mandate to govern, but not a mandate for a radical measure such as the People's Budget. Landsdown wished the Liberals to hold an election to demonstrate whether they could gain such a mandate. This caused an uproar between the Liberals and the Lords and a constitutional crisis ensued. ...read more.

To do this they introduced the Parliament Bill which would reduce the power of the House of Lords. Obviously the Lords turned this bill down immediately and felt extremely aggressive towards the Liberals. The Parliament bill was typically partisan as it stated that the House of Lords would have no control over the country's finances and money bills. It was now the Speaker's responsibility to decide what was a financial bill or not. Asquith realised that the Lords would never pass such a bill without Liberal or middle class support within the Lords. He argued that the Lords were undemocratic because they were not an elected institution and when the Parliament Bill did get passed, it confirmed that you could not run parliament from the Lords. The Conservative leader Balfour had made many comments over the years about the Lords taking over the job of running the United Kingdom. Again this caused large scale conflict and arguments between the Liberals and the Lords. It would be undemocratic for an unelected House to be in control. * * * * * ...read more.