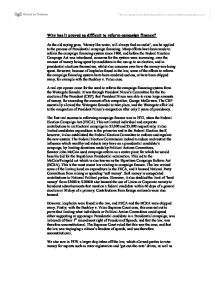 Why Has It proved So Difficult To Reform Campaign Finance

Firstly, with the Buckley v. Valeo Supreme Court case, this case set out to prove that limiting what individuals or Political Action Committees could spend either supporting or opposing a Presidential candidate in a Presidential campaign, was in breach of their 1st amendment right of Freedom of Speech, and that the law, was therefore unconstitutional. The Supreme Court ruled that this was the case, and that the law was impinging a citizen's freedom of speech, and was therefore unconstitutional. We also saw in 1979, a larger chip taken off the law, which allowed parties to raise money for aspects such as voter registration and 'get-out-the-vote' drives, as well as 'party building' activities. However, as we said earlier, this was regarded as soft money, and people found it very hard to regulate, without infringing on 1st amendment rights, and gradually became out of control. In 2004, during the general election, came the imminence of '527' groups, who were named after the respective tax code. A 527 group is a nonprofit group who may lobby for specific laws or reforms. ...read more.

This may be why it has proved so difficult to reform, because many people do not want reform. However, this is the problem, as the amount of money which a Presidential candidate holds, can be their message, as opposed to their policy proposals etc. However, there have been some proposals for Campaign Finance Reform, for example, what people are calling 'clean money' or 'clean elections'. This is when each candidate who chooses to participate is given a certain, set amount of money. In order to qualify for this money, the candidate must collect a number of signatures, and small contributions - usually $5. The candidates are not allowed to accept external funding and donations, or their own personal funds. Another method called 'matching funds', allows a candidate to raise funds from private donors, but provides matching funds for the first chunk of these donations. A system like this is used in the Presidential Primaries, however, there are fears that this method can be used as a safety net for the losers in these races. ...read more.