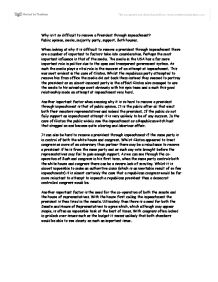 Why is it so difficult to remove a President through impeachment?

Why is it so difficult to remove a President through impeachment? Public opinion, media, majority party, support. Both houses. When looking at why it is difficult to remove a president through impeachment there are a number of important to factors take into consideration. Perhaps the most important influence is that of the media. The media in the USA has a far more important role in politics due to the open and transparent government system. As such the media plays a vital role in the success of an attempt at impeachment. This was most evident in the case of Clinton. Whilst the republican party attempted to remove him from office the media did not back them instead they seemed to portray the president as an almost innocent party in the affair! ...read more.

If the public do not fully support an impeachment attempt it is very unlikely to be of any success. In the case of Clinton the public widely saw the impeachment as a Republican witch hunt that dragged on and became quite a boring and laborious affair. It can also be hard to remove a president through impeachment if the same party is in control of both the white house and congress. Whilst Clinton appeared to treat congress as more of an adversary than partner there may be a reluctance to remove a president if he is from the same party and as such any vote brought before the representatives may fail to gain enough support. ...read more.

Another important factor is the need for the co-operation of both the senate and the house of representatives. With the house first calling the impeachment the president is then tried in the senate. Ultimately then there is a need for both the Senate and House of Representatives to agree which, which although may appear simple, is often an impossible task at the best of times. With congress often locked in gridlock over issues such as the budget it seems unlikely that both chambers would be able to see clearly on such an important issue . Outline the major differences in the functions of the Senate and House of Representatives Represent states - national out look Elect vice president 1824 Supreme court Explain, with examples, why it is difficult to amend the US Constitution. ...read more.