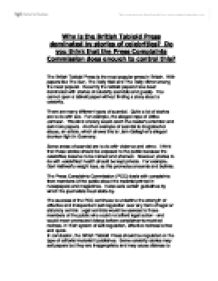 Why is the British Tabloid Press dominated by stories of celebrities? Do you think that the Press Complaints Commission does enough to control this?

Why is the British Tabloid Press dominated by stories of celebrities? Do you think that the Press Complaints Commission does enough to control this? The British Tabloid Press is the most popular press in Britain. With papers like The Sun, The Daily Mail and The Daily Mirror among the most popular. Recently the tabloid papers have been dominated with stories of celebrity scandals and gossip. You cannot open a tabloid paper without finding a story about a celebrity. ...read more.

Some areas of scandal are to do with violence and crime. I think that these stories should be exposed to the public because the celebrities deserve to be named and shamed. However, stories to do with celebrities' health should be kept private. For example, Geri Halliwell's weight loss, as this promotes anaemia and bulimia. The Press Complaints Commission (PCC) deals with complaints from members of the public about the material printed in newspapers and magazines. ...read more.

In their system of self-regulation, effective redress is free and quick. In conclusion, the British Tabloid Press should be regulated on the type of editorial material it publishes. Some celebrity stories may sell papers but they are inappropriate and may cause distress to the people involved. Other articles help publicise the violent acts of people, I feel that these should be published to show the public what kind of things they can expect from them - to name and shame them. Although victims names should not be published and sometimes even the people who cause the trouble because it would start even more violence. ...read more.