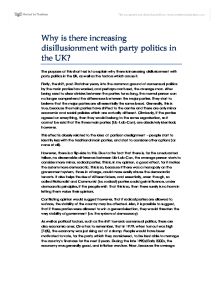 Why is there increasing disillusionment with party politics in the UK?

Why is there increasing disillusionment with party politics in the UK? The purpose of this short text is to explain why there is increasing disillusionment with party politics in the UK, as well as the factors which cause it. Firstly, the shift, post-Thatcher years, into the common ground of consensual politics by the main parties has worried, and perhaps confused, the average man. After being used to clear divides between the parties for so long, the normal person can no longer comprehend the differences between the major parties. They start to believe that the major parties are all essentially the same beast. Generally, this is true, because the main parties have shifted to the centre and there are only minor economic and social policies which are actually different. Obviously, if the parties agreed on everything, then they would belong to the same organisation, so it cannot be said that the three main parties (Lib-Lab-Con), are absolutely identical, however. ...read more.

Conflicting opinion would suggest however, that if radical parties are allowed to surface, the stability of the country may be affected. Also, it is possible to suggest, that if these parties were allowed to win a general election, they would threaten the very stability of government (i.e. the system of democracy). As well as political factors, such as the shift towards consensual politics, there are also economic ones. One has to remember, that in 1979, when turnout was high (76%), the economy was just rising out of a slump. People would have been motivated to vote, for the party which they considered, to be best able to manage the country's finances for the next 5 years. During the late 1990s/Early 2000s, the economy was generally good, and inflation was low. Now, because the average man had food in his fridge and a car in the garage, there was not so much motivation to leave the house, and go vote. ...read more.

Will they vote for the parties they fail to identify with, or will they vote for more minor parties, as a sort of protest vote, against the establishment (or perhaps, against the shift towards consensual politics). In conclusion, one could suggest that there is not increasing disillusionment with party politics, within the UK, merely disillusionment with the major parties. It seems that many politically active citizens within the state are shifting their attention to more minor parties, and more radical ones, simply due to the shift to consensual politics; partisan dealignment and uncertain economic conditions. Some are even so fed up of the political game, that they shift their efforts to single issue pressure groups. For example - the Royal Society for the Protection of Birds has more than a million members, as of today, whilst the Conservatives (usually having high numbers of members) having merely 270,000 members (a fall from 1980, of approximately one million). ...read more.