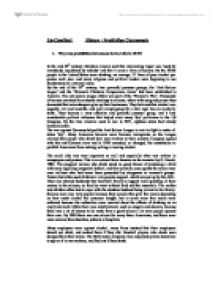 Why was prohibition introduced in the USA in 1919?

Lia Camilleri History - Prohibition Coursework 1. Why was prohibition introduced in the USA in 1919? In the mid-19th century Abraham Lincoln said that intoxicating liquor was 'used by everybody, repudiated by nobody' and that it came a form of society. By the 1820s people in the United States were drinking, on average, 27 litres of pure alcohol per person each year, and many religious and political leaders were beginning to see drunkenness as a national curse. By the end of the 19th century, two powerful pressure groups, the 'Anti-Saloon league' and the 'Women's Christian Temperance Union' had been established in America. The anti-saloon league (ASL) was part of the 'Women's War'. Thousands of women marched from church meetings to saloons, where with song and prayer they demanded that saloonkeepers give up their businesses. They believed that alcohol was ungodly, evil and wasteful, and were campaigning for a total legal ban on alcoholic drink. ...read more.

Posters had often used children to win peoples support, which was put up by the ASL. They also showed husbands that had their family to support were spending all their money in the saloons, so families went without food and the essentials. The mother and children often had to cope with the drunken husband being violent to his family. Saloons were also very popular because they would often give free meals depending on how much alcohol the customer bought, but in some areas free meals were enforced because the authorities were worried about the effects of drinking on an empty stomach. Often there was entertainment, such as singers and dancers, because there was a lot of money to be made from a good saloon a lot more people opened their own. By 1909 there was one saloon for every three Americans, and there were more saloons than churches, schools or hospitals. ...read more.

Two US Senators, Reed and Randall, who were against closing the saloons, tried a plan, which was they proposed a law that they thought was ridiculous that everyone in the senate would see how impractical Michigan had been. They proposed that all alcohol should be banned including alcohol in private homes. Unfortunately, the US Senate thought this was a good idea and passed it. Alcohol and drunkenness were seen as the root of many evils including crime, s****l immortality and poverty. So strong was the campaign that even many 'wets' who enjoyed drink were unwilling to publicly oppose the Anti-Saloon League, and politicians were reluctant to oppose prohibition for fear of losing votes. By January, 1919, 75% of the states in America had approved the Eighteenth Amendment to the constitution stated that '... the manufacture, sale or transportation of intoxicating liquors within ... the United States ... for beverage purposes is hereby prohibited'. A separate law called the Volstead Act defined 'intoxicating liquor containing more than 0.5 per cent alcohol', and this was passed in 1920. ...read more.