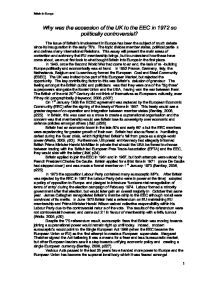 Why was the accession of the UK to the EEC in 1972 so politically controversial?

Why was the accession of the UK to the EEC in 1972 so politically controversial? The issue of Britain's involvement in Europe has been the subject of much debate since its inauguration in the early '70's. The topic divides member states, political parties and defines many International Relations. This essay will present the main areas of contention and acrimony that EU membership brings, but to understand how these have come about, we must first look to what bought Britain into Europe in the first place. In 1945, once the Second World War had come to an end, the task of re-building Europe politically and economically was at hand. In 1952 France, Germany, Italy, the Netherlands, Belgium and Luxembourg formed the European Coal and Steel Community (ESEC). The UK was invited to be part of this European Market, but rejected the opportunity. The key contributing factor to this was Britain's delusion of grandeur. The feeling amongst the British public and politicians was that they were one of the "big three" superpowers alongside the Soviet Union and the USA, having won the war between them. The British of the mid 20th Century did not think of themselves as Europeans culturally, even if they did geographically (Heywood, 2008, p307). On 1st January 1958 the ECSC agreement was replaced by the European Economic Community (EEC) ...read more.

In total, 785 MEP's will sit in Parliament and will be responsible for scrutinizing the European Commission's proposals. The European Commission is the executive arm of the EU and consists of 27 commissioners (one from each member state) and the commission's president (Heywood, 2008, p310). The commissioners are appointed by the European Council who are comprised of senior executives from all member states of the Union, The union will decide the overall position and direction of the E.U. Any part of the union which moves to bring in a new law or standard must do so in line with the European Court of Justice (ECJ). As the power of Europe supersedes that of an individual member nation, the ECJ is a very powerful and influential organisation. It consists of 27 judges (again, one from each member state) and eight advocate generals who advise the court (ibid, p310). The ECJ provides an excellent example of the EU's impact in the British constitution and its impact on sovereignty. Britain doesn't have a full written constitution, so when an amendment is proposed to British law it is debated with out a real benchmark for what is and is not allowed. Former MP Tony Wright describes Britain's constitution as a "political shed crammed full of objects collected over a political lifetime. ...read more.

gives states the flexibility to opt-out or amend European legislation to their own satisfaction. It is my view that Britain has not yet lost any sovereignty of note by being a member of the EU. Tony Benn said that "in practice political sovereignty has long rested with the executive" (www.thestudentroom - accessed 12/01/11) and this is an opinion I share. In Britain we can still follow our own defence policy, education policy, welfare policy and healthcare policy. Our economic policy remains predominately our own as a result of not joining the Euro. The trade we gain or the money we lose as a result of EU membership is commonly debated. The UK Independence Party would have Britain leave Europe and negotiate a trade agreement similar to the Swiss model, but the Liberal Democrats would have Britain move closer to Europe to build influence and start to shape not just Britain but Europe the way they would like. The Conservative and Labour parties have moved their positions many times since the mid 70's and tend to follow the more populist anti-Europe stance when in opposition. The creation of the European super-state is undoubtedly a possibility in the future, but it will only happen with the blessings of the people who would live in it, and in the UK the early indications are that they would not. ...read more.