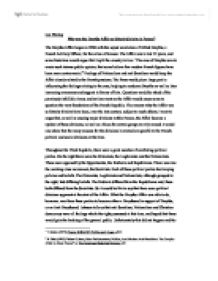 Lee Waring Why was the Dreyfus Affair so bitterly divisive in France? The Dreyfus Affair began in 1894 with the unjust conviction of Alfred Dreyfus, a French Artillery Officer, for the crime of treason. The Affair was to last 12 years, and some historians would argue that it split the country in two.1 The case of Dreyfus was to create such intense public opinion, that some believe few modern French figures have been more controversial.2 Feelings of Nationalism and anti-Semitism would keep the Affair closely related to the French passions. The Press would play a large part in influencing the feelings relating to the case; helping to condemn Dreyfus as well as later increasing awareness and support in favour of him. Questions would be asked of the previously infallible Army, and as time went on the Affair would cause some to question the very foundations of the French Republic. The reasons why the Affair was so bitterly divisive have been, over the last century, subject to much debate. I want to argue that, as well as causing major divisions within France, the Affair became a symbol of these divisions, as well as a focus for certain groups to rally around. I would also show that the many reasons for the divisions it created are specific to the French political and social divisions at the time. Throughout the Third Republic, there were a great number of conflicting political parties. On the right there were the Orleanists, the Legitamists and the Nationalists. These were opposed by the Opportunists, the Radicals and Republicans. ...read more.

Zola, believing Dreyfus to be innocent, explained the case in simple terms and made the public aware that an innocent man was in prison. The article was titled 'J'accuse' and was later described as a "revolutionary act of incomparable power"21 which resulted in people taking sides. Chapman would argue that until 1897 the affair had been concentrated on two narrow groups; the people linked to Dreyfus who believed him to be innocent from the outset, his family for example, and the ministry of war, chief of staff and statistical section. He believes that had the Affair been confined to these groups, it would have been easily wound up, creating little division.22 What the press did was extend the number of people with an interest in the case so that it now included political and religious groups as well as public opinion. This complicated matters and allowed the case to be opened up to debate. Johnson believes that this would not, perhaps, create a problem in a country that had no divisive factors to begin with, as the press doesn't play too important a role. However, in a country which already has underlying divisions, the press will have much more influence23, helping to "re-kindle the dying embers of mutual antipathy."24 The Army was at the centre of the debate over Dreyfus. Dreyfus was an army officer, allegedly attempting to pass military secrets to a foreign enemy. It was the Army who suspected, charged and convicted Dreyfus. It would also be the Army who would refuse Dreyfus' retrial, even when they realised that he was innocent. ...read more.

The reasons have been debated ever since. Whilst there were factors such as anti-Semitism and anti-Militarism involved in the Dreyfus Affair, it was not essentially a question of whether Dreyfus was guilty or innocent. Dreyfus was ultimately a symbol, and as such highlighted many of the underlying divisions. The Affair was so divisive because it questioned of the rights of the individual in the republic. The left believed that the rights of an individual should be the states' uttermost concern, and that it should not matter that by admitting a judicial error, the army's honour, or the state system could be harmed.56Without the possibility of injustices being corrected, the left believed that the state could not exist unfortunately the right disagreed believing that "while there could be society without justice, there was never any justice without society."57In England, there was a similar case involving a naval cadet. It had many of the same circumstances as the Dreyfus Affair.58 However, it was not such a divisive affair in England. This is because essentially there were no underlying divisions on how the state should be run, as there were in France. The Dreyfus Affair had touched a nerve amongst the already sensitive French population. What had started as a case of treason against a Jew, and originally represented the dangers of a foreigner, evolved into a far more divisive affair. It pitched the left against the right over traditional targets such as the church, army and aristocracy. Ultimately, it was not Dreyfus that the French were divided upon, but a Republican France. ...read more.