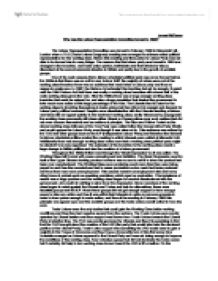 Why was the Labour Representation Committee formed in 1900?

James McCance Why was the Labour Representation Committee formed in 1900? The Labour Representation Committee was formed in February 1900 in Memorial Hall, London when a TUC (Trade Unions Congress) meeting was arranged to address united political representation for the working class. Before this meeting and time period a Labour Party was not able to be formed due to many things. The reasons that the labour party was formed in 1900 are: changes in the franchise, new trade union opinion, individuals and their efforts for labour, discontent at the current economic situation in Britain and partly due to the growth of socialist groups. One of the main reasons that a labour orientated political party was never formed before the 1880s is that there was no call for one; before 1867 the majority of voters were not of the working class therefore there was no audience that would elect a Labour party and thus no reason to create one. In 1867, the Reform Act extended the franchise but not by enough, it wasnt until the 1884 Reform Act that there was really a working class franchise with around half of the male working class given the vote. After the 1880s there was a large enough working class franchise that could be catered for, and also a large population that desired the government to take much more notice of this large percentage of the vote. ...read more.

Some members of the working class began to rebel against the Liberals and Tories and look for alternatives; those were Socialist groups and the ILP. Alone these groups did not get enough support or have enough power to take any action and thus it was within their interests to unite on common grounds in order to have power enough to make action, and thus at the meeting in February 1900 this principle was agreed upon and the socialist groups and the trade unions aswell united to form the LRC. Trade Unions were the only bodies that could gain the Working Class better working conditions and thus they had massive support from the workers. The Trade Unions were mostly operated by Liberal leaders and thus support was thrown from Trade Unions towards the Liberal Party at election time. The TUC was mostly governed by Liberals and thus it is surprising to find that the TUC brought about the creation of the LRC (the party that would later take the dominant position of the Liberal Party). Trade Union support was something the LRC would need to gain a majority in the House of Commons and thus it was a favourable turn of fate that some New Unionists emerged as Unions opposed to the Liberal Party as it was not doing enough to improve the conditions of the working class. ...read more.

and William Morris (founder of the Socialist League). William Morris left the SDF because of personal differenced with Henry Hyndman and formed the less eccentric Socialist League; the Socialist League wanted to promote government reform towards a socialist Britain as opposed to a full blown Marxist revolution. The Fabian Society were and anti-capitalist anti-marxist socialist movement which believed that they could slowly reform British government to their own version of toned down socialism. All three groups contributed individually to the battle against Liberalism and Conservativism and united opinion against the governments in small groups. It wasn't until the groups had joined in the LRC that they had real power but they were still a monument to the mounted political opposition to the present system and also a catalyst in the formation of a Labour/Socialist/Trade Unionist political party. Through discussion the various focal points that have been documented by historians, the general concensus seems to be that the most important reason that why the Labour Party was not formed before, and was formed in 1900 was that there was mounting discontent with present governments and that the opportunity (the franchise increased to the working class) was now there for a Labour Party to be successful. The LRC might not have been formed without all the other reasons discussed but, for sure, the franchise that was previously limited, being opened, made the biggest change in British politics and British society in the past 200 years. ...read more.