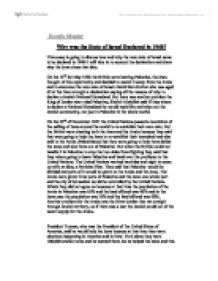 Why was the State of Israel Declared in 1948?

Hozefa Master Why was the State of Israel Declared in 1948? This essay is going to discuss how and why the new state of Israel came to be declared in 1948 it will take in to account the declaration and show why the Jews chose that date. On the 14th for May 1948 the British were leaving Palestine, the Jews thought of this opportunity and decided to s****h it away from the Arabs and to announce the new state of Israel. David Ben Gurion who was aged 62 at the time wrought a declaration saying all the reasons of why to declare a Jewish National Homeland. But there was another problem the King of Jordan who ruled Palestine, Sheikh Abdullah said if they where to declare a National Homeland he would rapid fire and wipe out the Jewish community, not just in Palestine in the whole world. ...read more.

Which they did not agree on because at that time the population of the Arabs in Palestine was 65% and the land offered was 40% and in the Jews case the population was 35% and the land offered was 60%. Another problem for the Arabs was the River Jordan that ran straight through Jewish territory, so if there was a war the Jewish could cut of the water supply for the Arabs. President Truman, who was the President of the United States of America, said he would help the Jews because at that time they were elections happening in America and in New York alone they were 100,000 Jewish votes and he wanted them. So he helped the Jews and this is exactly what the Jews needed. America at this point was also one of the powerfulness country and the Arabs had no chance of defeating the Americans. ...read more.

On the 2nd of November 1917 The Balfour declaration recognised that Jews needed help to rebuild their national and promised homeland. There are many reasons of why the state of Israel was declared in 1948. Israel was the birthplace of the Jewish people and nation. The Jews have tried many times to re-establish their homeland, which was still known to be Palestine. Since the Roman times the Jews have never had a homeland and have been scattered all over the world. The Jews believe that Israel is their promised land and promised by God himself. The Jews even claim that God made them a covenant (agreement). The Jews/Israelis/Zionist claim that Palestine is their promised land to God's promised and chosen people. After a lot of thinking by Ben Gurion and what Sheikh Abdullah would do if he declared a Jewish Homeland, he took the opportunity and on the 14th of May 1948 declared a Jewish State, to be called "Israel". But David Ben Gurion still needed reconisation of the Jewish State from the United Nations. ...read more.