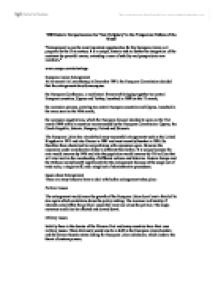 Will Eastern Europe become the 'New Periphery' to the Prosperous Nations of the West?

Will Eastern Europe become the 'New Periphery' to the Prosperous Nations of the West? "Enlargement is one the most important opportunities for the European Union as it prepares for the 21st century. It is a unique, historic task to further the integration of the continent by peaceful means, extending a zone of stability and prosperity to new members." www.europa.com/ec/enlarge European Union Enlargement At its summit in Luxembourg in December 1997, the European Commission decided that the enlargement should encompass: the European Conference, a multilateral framework bringing together ten central European countries, Cyprus and Turkey, launched in 1998 on the 12 march; the accession process, covering ten central European countries and Cyprus, launched in the same year on the 30th march; the accession negotiations, which the European Council decided to open on the 31st march 1998 with six countries recommended by the European Commission: Cyprus, the Czech Republic, Estonia, Hungary, Poland and Slovenia. The European Union has already had many successful enlargements such as the United Kingdom in 1973 and also Greece in 1981 and most recently Sweden in 1995. So therefore there should not be any problems with expansion again. However the expansion under consideration today is different then before. ...read more.

grants concentrate on improvements to infrastructures, particularly roads. These expenditures have been largely in the poorer regions, especially Greece, Portugal and Ireland, the three poorest members of European Union. The thrust of the policy is to improve the economic environments of the poorer regions so that investment is attracted into them. The 'New Periphery'! The Balkan area has received a lot of European Union aid in the last decade or more due to their problems with civil war, etc. Bosnia and Herzegovina have received assistance of over �2billion since 1991. The main objectives of this aid are to consolidate the peace process, which also involves the ethnic reconsolidating and the return of refugees. Also the European Union is trying to establish functioning institutions, lay foundations for sustainable economic recovery and growth and bring it closer to European Union standards. So according to the Dayton Agreement, which is a stability pact, there needs to be a stable social political structure and functioning economy built. Croatia in 1999 received over �20 billion with 15 for reconstruction. The European Union have helped in other ways such as European Union-Croatia Consultative Task Force, which has established informal political dialogue at a higher level and are starting preparation to open negotiations for a Stabilisation and Association Agreement as soon as possible. ...read more.

Unfortunately for the Balkan region they have come out of Communism and into wars and have not been able to find their feet properly. Their industries are unfortunately old and still heavily primary based so they are falling into the present peripheral framework and are depressed regions. The rural areas look like old medieval times in Britain where the countryside is covered in long narrow strips owned by loads of different landowners. Which are obviously of low productivity. The urban areas are also characteristic of the present depressed regions due to their high dependence on primary industry, decaying housing and infrastructure, and social depravation. The present help that they are receiving from the European Union should be able to get rid of this type of production and become more secondary or even tertiary based. Which will therefore make the area more prosperous and also more likely to merge with the European Union without many problems and mainly be able to keep most of their workers there or even pull new investors into the area. So in conclusion as long as the integration and the European Union Accession Partnership before integration takes place and is followed carefully and all goes well then the Balkan area and even all of Central and Eastern Europe could integrate and not become peripheral but prosperous memberstates instead. ...read more.