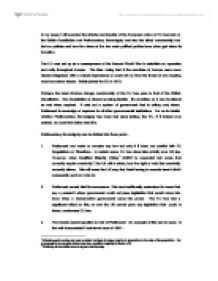 In my essay I will examine the effects membership of the European Union or EU has had on the British Constitution and Parliamentary Sovereignty and also the effect membership has had on policies and how the views of the two main political parties have changed since its inception. The EU was set up as a consequence of the Second World War to establish co-operation and unity throughout Europe. The idea being that if the countries of Europe were more closely integrated, with a mutual dependence on each other, then the threat of war erupting would somehow lessen. Britain joined the EU in 1973. Perhaps the least obvious change membership of the EU has seen is that of the British Constitution. The Constitution is viewed as being flexible. It's unwritten and can be altered as and when required. It sets out a system of government that is unitary and where Parliament is sovereign or supreme to all other governmental institutions. For us to decide whether Parliamentary Sovereignty has been lost since joining the EU, if it indeed ever existed, we must first define what it is. Parliamentary Sovereignty can be divided into three parts:- 1. Parliament can make or unmake any law but only if it does not conflict with EU Regulations or Directives. ...read more.

Members are directly elected MPs or foreign ministers from their own country. (Budge, I, et al 2004, 214) The European Commission's role is to implement the decisions made by the Council of Ministers. The Commission have offices, called Representations in all of the member states of the European Union. In the UK there are offices in London, Edinburgh, Cardiff and Belfast. The European Parliament consists of MEPs directly elected by the people of Europe to represent their interests. Its role is to discuss policies and suggest amendments before finally rubber stamping any new laws. The Parliament also has the power to dismiss the European Commission. The decision-making system of the EU is often seen to be far removed from the people of Europe. The complex jargon and legislation and the fact that there appears to be little accountability creates what is termed a "democratic deficit". This can be countered by what is termed the "subsidiarity principle". This means that EU decisions are taken as close as possible to the citizen. The EU will not take action if it is more effective to do so at national, regional or even local level, except where EU action is solely responsible. In most European countries there is a Ministry for European Affairs that deals with all aspects of the EU. ...read more.

The democratic deficit could be managed better with clearer information concerning Europe filtering through to the man on the street and using the principle of subsidiarity seeing the EU giving more power back to national, regional and local governments in areas where it is not directly concerned. Today the political parties are still divided. The Labour government is taking small tentative steps toward deeper EU integration and sees it as a positive association. The Conservative Party is still sceptical but realise that a fair amount has been gained since joining. Their main concern is that Europe has too much influence over the UK and would like to see some of our sovereignty recouped. Policies are a little clearer but there are still considerable divisions both within and between the main parties. Our future is in Europe and an "ever closer union" with the EU is a good thing for us. We have gained far more than we have lost and I believe that the Labour government is taking tentative steps in the right direction. When the time is right we will join the Euro but only when there are clear economical advantages for us to do so. I believe the question of Parliamentary Sovereignty is a moot point. If indeed it ever existed in the first place, pooling our sovereignty with other member states places us in a stronger position globally. ...read more.