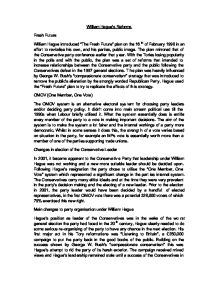 William Hague's Reforms Fresh Future William Hague introduced "The Fresh Future" plan on the 16th of February 1998 in an effort to revitalise his own, and his parties, public image. The plan mirrored that of the Conservative party conference earlier that year. With the Tories losing popularity in the polls and with the public, the plan was a set of reforms that intended to increase relationships between the Conservative party and the public following the Conservatives defeat in the 1997 general elections. The plan was heavily influenced by George W. Bush's "compassionate conservatism" strategy that was introduced to remove the public's alienation by the strongly worded Republican Party. Hague used the "Fresh Future" plan to try to replicate the affects of this strategy. OMOV (One Member, One Vote) The OMOV system is an alternative electoral system for choosing party leaders and/or deciding party policy. It didn't come into main stream political use till the 1990s when Labour briefly utilised it. What the system essentially does is entitle every member of the party to a vote in making important decisions. ...read more.

Main changes to party organisation under William Hague Hague's position as leader of the Conservatives was in the wake of the worst general election the party had faced in the 20th century, Hague clearly needed to do some serious re-organising of the party to have any chance in the next election. His first major act in his Tory reformations was "Listening to Britain", a �250,000 campaign to put the party back in the good books of the public. Building on the success shown by George W. Bush's "compassionate conservatism" this was Hague's attempt to rid the party of its harsh exterior. The campaign received mixed views and Hague's leadership remained stale until a success of the Conservatives in the European party proved he was doing something right. Gaining the Tories 36 seats to Labours 29. The success, he claimed, was down to his opposition of the Euro currency, a trade mark of Conservative ideology. Hague tried to give the party a more democratic feel, instituting the OMOV system into many more of the parties decision making processes and moving away from some of the parties more hardcore ideologies, particularly the view on women and immigration. ...read more.

The event was shunned by the media, and following party conference didn't fare much better. The Sun berated Hague's performance and the party, which lost the support of probably the most influential paper in the country that had in the past played a pivotal role in Tory victories. Amanda Platell one of Hague's leading supporters told him to abandon this new approach and follow what he stood for. This lead to more ridiculous stunts and public outbursts by Hague, and it became clear in many people's view that he was just making rash attempts to win votes. The Conservatives suffered a dreadful defeat yet again at the general elections in 2001, gaining only one more seat than in 1997. Hague swiftly resigned. Clearly his politics had failed, but aspects of his reforms were beneficial to the party. The strong introduction of the OMOV system changed the way the Conservatives have handled internal voting ever since and with many other reforms helped reduce party officials elitism. However, overall they only clouded a vain attempt to rejuvenate the party and strive to win the next election, which drastically failed. ...read more.