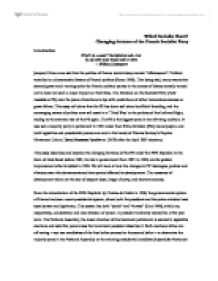 Wilted Socialist Rose?: Changing fortunes of the French Socialist Party Introduction What's in a name? That which we call a rose By any other name would smell as sweet. - William Shakespeare Jacques Chirac once said that the politics of France would always remain "effervescent". Political volatility is a characteristic feature of French politics (Pierce 1992). That being said, many events that seemed grave and a turning-point for French political parties in the course of history actually turned out to have not such a major impact on their fates. The literature on the Socialist Party (Parti Socialiste or PS) over the years of elections is ripe with predictions of either tremendous success or grave failure. This essay will show that the PS has done well since its official founding, and the converging nature of politics now will result in a 'Third Way' in the policies of the Left and Right, leading to the eventual rise of the PS again. The PS is the biggest party in the left-wing coalition. It was last a majority party in parliament in 1997 under then Prime Minister (PM) Lionel Jospin, and both legislative and presidential powers are now in the hands of Nicolas Sarkozy's Popular Movement Union (Union Mouvement Populaire or UMP) after the April 2007 elections. This essay describes and explains the changing fortunes of the PS under the Fifth Republic in the form of trials faced before 1981, its rule in government from 1981 to 1992, and its gradual improvement after its defeat in 1993. We will look at how the changes in PS' ideologies, policies and alliances over this abovementioned time period affected its development. ...read more.

Mitterrand launched a campaign with the slogan "Changer la vie" in 1977 (RTL 2006) to promote his Socialist domestic program that included nationalization (industries and banks), lower unemployment (create jobs by implementing a 35-hour work week), more welfare (increase minimum wage and social security benefits), and greater redistribution of wealth (lower taxes for low-income groups and higher taxes for companies and the wealthy) (Wells 1981) through increased government spending. As for his foreign policy, Mitterrand realized he needed to embrace Gaullist policy2 in order to gain public support for his 1988 re-election. Luckily, the Gaullist theory of foreign policy where the president holds tight personal power over defense and foreign affairs was flexible and ambiguous enough to be adapted to the PS' political and ideological concerns (Harrison 1984). Mitterrand managed to pass off Socialist decisions as his own idiosyncratic leadership pattern, and fortunately, the PS seemed better representatives of Gaullist principles (Harrison 1984). Furthermore, the Socialists wanted to make world trade "more favorable to developing countries"; the French electorate agreed because they traditionally oppose "a world monetary system dominated by Washington" (Wells 1981). The infamous policy called the Devaquet Reform during the first cohabitation by Chirac's then-party Rally for the Republic (RPR) parliamentary majority in 1986. The reform proposed a restriction on the open access of universities, and an increase in fees to encourage competitiveness in education. This caused a student revolt, general strikes and the accidental death of a student by the police (Bryson 1987). This unpopular neoliberal policy helped to reinforce anti-Americanism, and the poor handling of the situation showed the perils of cohabitation. ...read more.

Lastly, fourth generation immigrants and older were offended at being told that their presence in regional government "risks driving away voters" (Goldhammer 07). The PS wants to capture this electorate but is reluctant to cede power. They need to change their strategies. However, there are still some problems in the PS like internal rivalry, an obsession with the left alliance, and a high abstention rate. They also need to address the problems that caused its defeat in 2002. Even though Hollande has been said to have "forged party unity in the notoriously fractious PS" (Crumley, 2004), in 2005 there were campaigns both for and against the European Treaty within the PS. Finally, the PS needs to replace the 'plural left' coalition with a new alliance strategy, and also needs to mobilize its supporters (Bell 2004). Some promising signs are the "stunning wins" in the regional and European elections, with the Socialist coalition coming in second with 218 out of 785 seats. Conclusion Like Shakespeare's rose, the PS has changed its approach but has remained true to its fundamental value of egalitarianism, a third of the core values of France, even while re-innovating and reconstructing itself. This is important since globalization is taking place at a rapid pace. The PS has already taken steps to embrace neoliberal economic policies. However, it needs to change its programme to be more rigorous and risk-taking in order to lift France out of its economic pit. It also has to change itself from within in order to win elections again; it cannot keep relying on the mistakes of the Right. The Left cannot just keep alternating governments like they have in the past; they have to provide an alternative. ...read more.