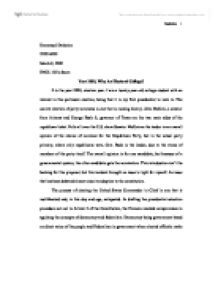 Emmanuel Daskalos 232216005 March 9, 2000 ENGL 1213, Sacra Year 2000, Why An Electoral College? It is the year 2000, election year. I am a twenty-year-old college student with an interest in this particular election, being that it is my first presidential to vote in. The current election of party nominees is one that is making history. John McCain, a senator from Arizona and George Bush Jr, governor of Texas are the two main sides of the republican ticket. Polls all over the U.S. show Senator McCain as the leader in an overall opinion of the choice of nominee for the Republican Party, but in the actual party primary, where only republicans vote, Gov. Bush is the leader, due to the views of members of the party itself. The overall opinion is for one candidate, but because of a governmental system, the other candidate gets the nomination. This introduction isn't the backing for this proposal, but this incident brought an issue to light for myself. An issue that has been debated almost since its adoption to the constitution. The process of electing the United States Commander in Chief is one that is multifaceted and, in this day and age, antiquated. In drafting the presidential selection procedure set out in Article 2 of the Constitution, the Framers reached compromises in applying the concepts of democracy and federalism. ...read more.

They are not the independent body they were intended to be" (Glennon 8). This evaluation is clear sign that even 170 years ago there were problems with the system. Of course there is not a flawless system, but this one was designed to be the best to directly represent the people and it has not shown this objective. Proponents for the electoral college as well as those for direct voting were all well educated and aristocratic, as were the times, but today the U.S. is a very different place. In the age of light speed communication, mass media exposure, and political coverage in every television news show. Because of this, the general public is knowledgeable, fairly interested, and has strong to moderate views on political issues. Of course ignorance is still a problem, but as compared to the lack of information and its availability 240 years ago, the amount and level of ignorance is exponentially smaller. This change in attitude and education level allows the citizens of the U.S. to make much more educated and thought out decisions regarding their choice of president as opposed to a decision over two centuries ago. If the American people are so corruptible and ignorant, then why do the people directly elect senators and representatives? These men and women create and ratify laws and Amendments, which is quite a large amount responsibility. ...read more.

Thus, state officials established the precedent that Congress would not inquire into the certification of the validity of electoral votes (Longley and Peirce) 141. These examples show clearly that severe disputes can and have resulted in the electoral college. The Constitution, now and as then, is silent on the procedures for determining the validity of electoral votes, and after the 1876 election the Republican-controlled House was unable to agree upon a compromise procedure with the Democratic-controlled Senate. Instead, the two houses agreed to set up an electoral commission. The commission was comprised of senators, representatives, and justices of the Supreme Court. The outcome of the commission, due to political affiliations and a Supreme Court justice being disqualified and replaced with an independent one, was that Hayes was elected president by only one electoral, after previously losing the popular vote. The abolishment of the U.S. electoral college in the electing of the president would be the most effective solution to a system that has been outgrown by modern education, technology, and media means to both young and older Americans. The ability of the citizens of the United States to directly elect their president would result in higher voter turn-out because the statement "every vote counts" would be true, resulting in a more active interest in the presidential election from a much larger population. The act of direct popular vote would finally resolve the disputes between when an election is fair in its majorities of popular and electoral votes. ...read more.