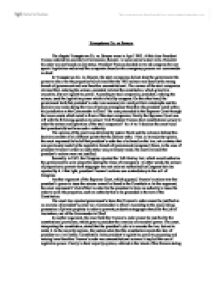 Youngstown Co. vs. Sawyer The dispute Youngstown Co. vs. Sawyer arose in April 1952. At this time President Truman ordered his secretary of commerce, Sawyer, to seize nation's steel mills. However his order was not based on any statue. President Truman decided not to ask congress for any special legislation and seized the companies based on his emergency powers as a commander in chief. In Youngstown Co. vs. Sawyer, the steel companies did not deny the government the power to take over the properties but claimed that the 1952 seizure was done by the wrong branch of government and was therefore unconstitutional. The owners of the steel companies claimed that, ordering the seizure, president violated the constitution, which gives him executive, but not legislative power. According to steel companies, president, ordering the seizure, used the legislative power which is held by congress. On the other hand, the government held that president's order was necessary to avoid political catastrophe and his decision was made during the time of serious emergency therefore the president acted within his jurisdiction as the Commander in Chief. The case proceeded to the Supreme Court through the lower courts which ruled in favor of the steel companies. Finally the Supreme Court was left with the following question to answer: Did President Truman have constitutional power to order the seizure and operation of the steel companies? ...read more.

Constitution limits president's legislative power to proposing and vetoing laws therefore Truman's order was unconstitutional science it implied the use of legislative power. Finally in their majority opinion, referred to the intent of the framers stating that hey intended the legislative power to be vested in the hands Congress at all times, which was another reason why justices opposed Truman's order. However, Justice Jackson, in his concurring opinion presented a little different rationale. He claims that the range of president's powers is not fixed and depends on the Congress's stand on a given issue. In this light, he sets forth three hypothetical situations, in which the range of president's power is different. First situation concerns president acting with authorizations of congress and in such situation president's power is at its maximum. In the second scenario, a president is acting on his own and the congress neither denied nor granted him the authority. In such scenario president's powers may be questionable. The last and third scenario concerns president acting against the will of Congress and in such situation his power is supposed to be marginal. According to Jackson, president Truman's seizure is applicable to the third situation and by this Jackson questions or maybe even denies president Truman the authority to seize and operate steel mills. ...read more.

Concluding his concurring opinion, justice Jackson held that checks and balances, parliamentary system and limits on executive are crucial to democracy. On the other hand, justices Vinson, Reed, Minton presented very different views in their dissenting opinion. They held that president Truman had the authority to seize the steel mills because such authority was given to him by extraordinary political situation. The dissenting opinion criticized the ruling of lower courts claiming that awaiting for Congress to pass the appropriate legislation could have disastrous outcome. Justices who dissented also held that the constitution is to adapt over time especially to if various crises and emergencies require that and therefore, according to them, president Truman should have granted the authority of seizure. Also, Justices, in their dissenting opinion remind about the past when presidents acted, at the times of emergencies, with extraordinary prerogatives and that retrospective view should also justify president Truman's actions. In Youngstown Co. v. Sawyer, president Truman was not granted the authority of seizure of private properties. Such ruling makes this case very important from a constitutional standpoint, because it helped redress the balance of power and the system of checks and balances between different branches of government. The balance between different branches of government was upset after the Second World War, Great Depression and the postwar period. This case certainly helped to assure legislative and executive power of their proper role in the politics and became important for the American democracy. ...read more.