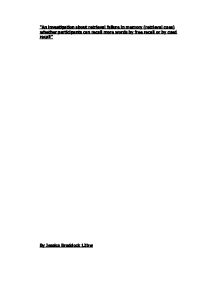 However in doing this, I did not want to make for example the school subjects too obvious e.g. maths, science etc, as people could guess the answer which would make the experiment not accurate. 20 words were chosen so that the participants wouldn't get bored, loose concentration and give up and so that they didn't find it too hard to remember the words. And 5 categories, so participants would find it a lot easier putting them into just a few, rather a lot of different categories. The arrangements of words read out was in no particular order I tried to split up the words which were in the same categories so the people with category cues did not have a big advantage over the people without. Procedure Participants were chosen by talking to form tutors and finding a class that was available, and able to do the experiment at the time I chose which was 20 to 9 in the morning. They were briefed. They were told that the experiment would be investigating the aspects of memory (see apendix1). If participants decided not to take part in the experiment they were thanked and the rest of the participants were the split up into two groups by dividing them down the middle depending on where they sat, and either given a blank piece of paper or a piece of paper with 5 different categories on. ...read more.

They found it hard to concentrate throughout the whole experiment as there was constant noise from the corridors and been surrounded by there friends was very distracting for them. By splitting the participants down the middle by where they were sat was not a good idea as they were easily distracted by there peers This could have effected my results compromising the validity of the research. If the study was to be repeated I would make sure the participants had fewer distractions. Doing the experiment after school would help reduce the noise level on the corridors and testing each participant individually I would also try to separate each participants by putting everyone on separate tables this would stop them talking to each other as much and maybe concentrate more on the task . By doing this, the environmental conditions would be the same for all the participants reducing the risk of environmental variables on the results. If I did further research I would like to explore weather the effects would be the same with an older generation of people and weather if they were old they would remember more or less words that someone younger. I would give all participants the same words and categories cues but instead of just comparing free recall and category cues I would also compare two different ages 11-17 and 65+ and see if there was a noticeable difference in words remembered. ...read more.