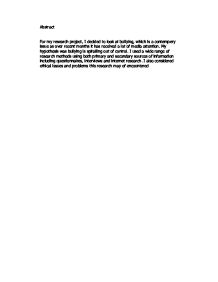 Abstract For my research project, I decided to look at bullying, which is a contempery issue as over recent months it has received a lot of media attention. My hypothesis was bullying is spiralling out of control. I used a wide range of research methods using both primary and secondary sources of information including questionnaires, interviews and internet research. I also considered ethical issues and problems this research may of encountered Introduction I have decided to do my research topic on bullying. Over recent months bullying has received a lot more media attention for a number of different reasons. One reason is the new form of bullying called Happy Slapping. This is whereby bullies record their victims being physically abused on their mobile phones. Also many serious incidents of bullying taking place such as 15 year old Natasha Jackman who was recently stabbed in her eye, back , head and chest in her school dinner queue. In July of this year the beat bullying campaign was launched, fronted by many famous stars. Bullying was defined as 'longstanding violence, mental or physical, conducted by an individual or a group against an individual who Is not able to defend himself or herself in that actual situation'. I wish to find out if bullying is spiralling out of control or that people are becoming more aware of how common bullying is. I plan to use a wide range of research methods including both primary and secondary sources. One method I will be using is questionnaires. I will give these to children in year 6 and adults between the age of 40-55 to find out their views on bullying. I will also interview a head teacher of a school to find out her views and I will also interview a primary school teacher. I will use a unstructured format to help me get more information. I will also ask in the interviews about how the schools deals with bullying and if they think bullying is getting worse or society is becoming more aware of it. ...read more.

I gave my questionnaires to two children and two adults. This was to test the reliability and validity of my research design. With the questionnaire designed for the children, both of them found some of the words I used difficult to understand. They also took around 10 minuets each to complete the questionnaire, which was rather time consuming for both them and me but this could have been de to the fact that they couldn't understand some of the words. I improved the questions by changing the wording of the questions to make them easier to understand. Also they couldn't think of some of the answers, so to help them think, I then listed some examples to help them think. When the adults did the questionnaires it took around 15 minutes to complete which was also too time consuming. This could of possible affected their answers as they could of become bored and rushed their answers. I improved this by reducing the amount of questions I had from 15 to 9, leaving the most important ones in. One problem I faced was when I asked some of the children to complete one of my questionnaires is they didn't want to participate. As there was more children in the class it wasn't too much of a problem but I did then have to disturb them when they were doing other work. When I gave my research questionnaires to children in year 6 I used a random sapling. "If sample selection is left entirely to the choice of researchers then their own personal bias will be a problem." (Moonie page 451). I use the systematic sampling method to eliminate the chance of personal bias influencing the sample selection. The way I choose my participants was by choosing every 3rd child on a register. One of the main ethical issues involved in any research is the effect of gender, race and culture on both researcher and participants. ...read more.

In conclusion my results both support my hypothesis ( bullying is spiralling out of control) and refute it. I found supporting evidence for both of these so I cant say which one I believe is true. My questionnaires and interview are supporting evidence for my hypothesis but the literature research shows me strong evidence to refute it especially the statistical evidence I found. Therefore I cant conclude from my research that bullying is spiralling out of control but it is a strong possibility that society is now more aware of it which may make bullying look like it is spiralling out of control with all the recent media attention there has been. If I repeated my research project to make it more valid and reliable I would do a longitudinal survey. With these I would be able to analyse the changes of bullying and make comparisons over time making the results I already have more reliable as I would be able to back them up with these repeated results. I would be able to gain a lot of quantitative data which would enable me to produce more reliable stats and help me to analyse statistical data over a longer period of time. I could also use supervised questionnaires as I would then know that the person that I wanted to fill in the questionnaire actually did making them more valid. A way of getting more respondents to fill my questionnaire within the short space of time that I would have would be to use postal questionnaires. I could cheaply reach a large amount of people making my results more valid. The problem with these is that they have a low response rate (less than 50%). I could also look at bullying from a different angle, to gain a better understanding of it. I could look more at the types of bullying that happen and the different effects it has on the victims. This could give me a deeper insight into the different aspects of bullying and could possibly show me ways in which bullying could be stopped. ...read more.