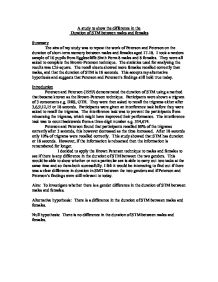 A study to show the difference in the Duration of STM between males and females Summary The aim of my study was to repeat the work of Peterson and Peterson on the duration of short-term memory between males and females aged 17-18. I took a random sample of 16 pupils from Egglescliffe Sixth Form 8 males and 8 females. They were all asked to complete the Brown-Peterson technique. The statistics used for analyzing the results was Chi-square. The recall sheets showed more females recalled correctly than males, and that the duration of STM is 18 seconds. This accepts my alternative hypothesis and suggests that Peterson and Peterson's findings still hold true today. Introduction Peterson and Peterson (1959) demonstrated the duration of STM using a method that became known as the Brown-Peterson technique. Participants were shown a trigram of 3 consonants e.g. DRS, GTH. They were then asked to recall the trigrams either after 3,6,9,12,15 or 18 seconds. Participants were given an interference task before they were asked to recall the trigrams. The interference task was to prevent the participants from rehearsing the trigrams, which might have improved their performance. The interference task was to count backwards from a three-digit number e.g. 354,674. ...read more.

A stopwatch was also used to count the time between the interference task and recall. Procedure: the experiment was held in a classroom, each participant was asked to sit at a desk and read the instruction sheet in front of him and her. They were then asked if they had any questions. The participants were then shown a sheet of three trigrams for 3 seconds. For 6 seconds then had to count backwards from a three digit number shown on the OHP and write this down on the paper provided. They were then asked to recall the trigrams also on the paper provided. This method was then repeated but the participants were asked to count backwards for 18 seconds. After the task was completed the participants were then debriefed. Results All trigrams correct after 6 seconds All trigrams correct after 18 seconds Males 37.5% 0% Females 50% 12.5% Treatment of Results In order to analyse whether the results showed any difference between males and female's duration in STM Chi-square was used. This was an appropriate test because Chi-square can be used to indicate if there is a difference between gender and the duration of STM. ...read more.

In Peterson and Peterson's experiment it does not distinguish a certain age range. This makes it difficult to show whether my results have reflected Peterson and Peterson's study. If I were to repeat this experiment I would use more participants of a wider age range to show if the duration of STM increases or decreases with age. I would also have tested the participant's recall after 9,12 and 15 seconds instead of just using 6 and 18 seconds. I would have also like to try out different stimuli for the interference task such as smells or melodies. A problem that arose during the experiment was that people weren't entirely sure at first what to do even with the clear instruction sheet in front of them. This made it very hard to explain to the participants without giving too much information away. Perhaps if I had done a trial experiment first or written the instruction out more clearly the participants might have understood more. It was clear to see with the use of the recall sheets whether or not the trigrams were correct or not so reliability was not a problem. The implications of my findings are that Peterson and Peterson's results still hold true today as they did in 1959. ...read more.