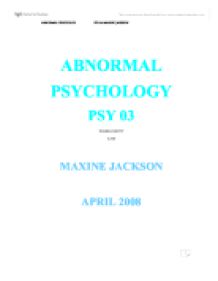 What is abnormal or normal? Abnormal literally means ‘away from the normal’. Although it does not state what normal is.

What is meant by normal differs over time and across cultures; it depends, to a certain extent on circumstances.

Is something normal because the majority are doing it? During the Second World War thousands of innocent people were murdered in the name of Adolf Hitler. The Nazi’s became the majority; however this does not make their behaviour normal.

One way to decide what behaviour is normal is to consider how usual it is. In that case then, behaviour that is less common is abnormal.

Society has standards to which they expect people to conform, this reflects on how people behave. These standards are classed as normal. Anyone who violates society standards is then abnormal. All societies are different and they expect different behaviour, because of this it is impossible to give a universal meaning of the word abnormal.

It is difficult to class a person as abnormal or indeed normal, because of the differences in people to begin with.

“A statistical norm is to do with a way of being, a quality or representation that is expressed or understood by many individuals. In other words, it is called average. High intelligence is as abnormal as low intelligence.”

Not all abnormal behaviours are undesirable, for example if a person is abnormally intelligent this is seen as desirable.

The psychodynamic approach to abnormality is explained by Freud in the systems of the mind, the id, ego and superego. According to Freud abnormal behaviour is a product of the unconscious. The mind causes conflicts between the id, ego and superego yet these conflicts are outside our awareness. Unresolved conflicts and or early experiences cause mental abnormality. In the approach of the psychodynamic model of abnormality healthy psychological functioning would mean serious psychological conflict would be absent. No trauma in terms of psychosexual development and ego structure would be in balance.

Behavioural approach to abnormality suggests that abnormal behaviours are learned through conditioning. Behaviour whether it be normal or abnormal is learned and it can also be unlearned.

What causes abnormality? Genetics, learned behaviour or unresolved conflicts? Do all of them contribute to a person becoming abnormal?

Symptoms of depression can vary from each person. A doctor may conduct a questionnaire asking the patient several questions about the way they think and feel. Depressive people usually suffer with low self esteem, loss of sex drive, lack of concentration and ability to think and possible suicidal thoughts. Other symptoms include loss of appetite, loss of interest in personal care and disruptive sleep patterns, irritability, sadness, weight loss or gain, menstrual changes and loss of energy.

According to studies by BBC Health as many as 35% of the population will experience an episode of depression at some point in their lives.

There is some evidence to suggest that depression is genetic, it runs in families, but at the same time evidence also suggests otherwise. Studies conducted on identical and non identical twins can provide the most evidence for this argument.

With reference to The NHS Direct web site on depression, studies have shown that different versions of a gene can be inherited which can have an effect on the serotonin level in a person’s brain. Serotonin is a mood changing chemical. This however could also be described as a biochemical cause for depression.

Studies on twins by Bierut et al in 1999 Australia, reported an inherited factor of around 40%, yet it also claimed that the environment also plays a big part in depression. The same study found that gender differences can have an influence on depression, it is more likely for a female to develop depression then it is for a male.

“Though we all suffer low moods, from 7% to 12% of men will suffer diagnosable depression in their lifetime. The figure is from 20% to 25% for women.”

In 1996 McGuffin et al found that 46% concordance in identical twins compared to 20% in non identical twins, this showed no evidence however, as to the affect of a shared environment.

Chemical imbalances or biochemical factors have also been blamed as a cause of depression. It has been claimed that depression is linked and perhaps caused by a disturbance in brain chemistry. There are three main neurotransmitters that are believed to be involved.

If a person’s serotonin is too low it then results in depression. All three neurotransmitters must work together on an even level in order for the brain to function properly.

It has been proven through autopsy results that low serotonin is apparent in a depressed person. However, this does not prove weather depression causes the serotonin level to drop or if low serotonin causes depression.

Sigmund Freud described depression as a human response to loss.  The psychodynamic approach to depression explains that the feelings of an adult reflect on the experiences of a child. If for example a child suffers the loss of their mother during childhood, this results in adult depression. Freud also argued that depression relates to early relationships with parents. Hostile feelings towards the parents are redirected towards the self resulting in hatred of the self. Feelings of depression can arise from lack of affection and love during childhood. Trauma of a child re-emerges in adulthood in the form of depression.

According to Freud, the conscious and unconscious parts of the mind can come into conflict with one another, producing phenomena called repression (a state where you are unaware of having certain troubling motives, wishes or desires but they influence you negatively just the same). In general, psychodynamic theories suggest that a person must successfully resolve early developmental conflict in order to overcome repression and achieve mental health. Mental illness, on the other hand, is a failure to resolve these conflicts.  Abraham in 1911 suggested that depression was the result of the anger felt towards a rejected loved one. The psychodynamic approach to depression is supported by the point that childhood loss predicts later vulnerability to depression.

A cognitive approach to depression, suggest that depression is a state of mind. A person becomes depressed because of the way they think and feel. Cognitive – behaviour theory is different to that of Seligman and Abramson’s ‘hopelessness theory’ which suggests that people learn from childhood that they are powerless to control what becomes of them, as a result adults become passive and helpless. Beck in 1991 developed the cognitive – behavioural theory of depression. He argued that depression stems from negative thinking.

“Depressed people suffer from a cognitive triad of negative beliefs about themselves, their future and their past experiences.”

A cognitive triad of negative thinking:

Beck suggested that people who are prone to depression have developed a ‘self-critical’ and negative way of thinking and feeling towards themselves.

Beck believes that negative thinking starts in childhood and is a result of been brought up by critical negative parents with whom the child identifies. Beck suggested that as a result of these early experiences the child develops into adulthood with a negative self schema.

Both cognitive and psychodynamic approaches to depression suggest the childhood experience is the route of depression. Freud’s theory suggests that depression is a result of the loss of a mother or perhaps a negative upbringing, Beck suggested almost the same as he suggested that a negative family encourages a person to become depressed. Both theories’ hold the majority of responsibility on the upbringing of a child. However, if this as the case, all children in negative households would then become depressed. Freud’s research on depression was limited due to the year of study. At the time in history it was the norm for a family to be cared for by the mother. This is not always the case in today’s society, given this would children having suffered the loss of a father also suffer depression in adulthood. Biological theories do appear to have an influence on depression. Twin studies and family studies do demonstrate likelihood that depression is genetic. However, genes alone do not cause depression; if this was the case then every child born into a depressive family would there for become depressed. This suggests that depression does have a link with genetics but it also needs other aspects to initiate depression.

In conclusion to this assignment, what causes depression? Given the research , evidence and the limitations of the theories surrounding depression it becomes fair to say that depression holds many reasons and is not only influenced by one factor and can in fact be a result of many.