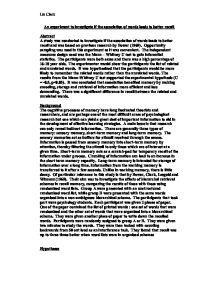 An experiment to investigate if the association of words leads to better recall Abstract A study was conducted to investigate if the association of words leads to better recall and was based on previous research by Bower (1969). Opportunity sampling was used in this experiment as it was convenient. The independent measures design used was the Mann - Whitney U test to gain inferential statistics. The participants were both sexes and there was a high percentage of 16-18 year olds. The experimenter would show the participants the list of related and unrelated words. It was hypothesized that the participants would be more likely to remember the related words rather than the unrelated words. The results from the Mann-Whitney U test supported the experimental hypothesis (U = -0.5, p<0.05). It was concluded that association benefited memory by making encoding, storage and retrieval of information more efficient and less demanding. There was a significant difference in recall between the related and unrelated words. Background The cognitive processes of memory have long fascinated theorists and researchers, and are perhaps one of the most difficult areas of psychological research but one which can yield a great deal of important information to aid in the development of effective learning strategies. A main issue is that research can only reveal indirect information. There are generally three types of memory: sensory memory, short-term memory and long-term memory. The sensory memories act as buffers for stimuli received through the senses. ...read more.

This would increase the ecological validity of the study. The time allowed for studying the words (3 minutes) may have not been long enough for the participants to learn them. Similarly, the time allowed for recall (2 minutes) may not have been long enough for some participants to write down all the words they remembered. Allowing more time in both cases would increase validity. The experiment also lacked ecological validity, as it is not what people do in every day life. The experiment only focused on a narrow, specific aspect of behaviour, the memory. There may be aspects that affect the memory that were not considered here. No ethical concerns arose in this study. Full consent was gained for the participants and no lies were told. No harm came to anyone and the participants were allowed to withdraw at any time. There are many different alternative methods that could have been used to carry out the experiment. Instead of words being written on pieces on paper, pictures of the objects could have been used instead. The results may have differed if this method was used. Some people can remember pictures more easily. This would be good further study that could be conducted in the future. The results are very useful as they tell us about the memory and how it works. These results would be useful to doctors as it could help them with their research about memory problems. Word association could help people with a poor memory - it could help to improve it. Incorporating some kind association into revising information for exams could prove beneficial. ...read more.