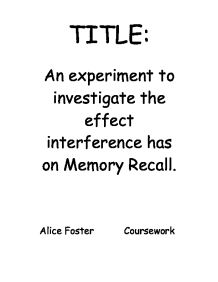 An experiment to investigate the effect of interference on memory recall

TITLE: An experiment to investigate the effect interference has on Memory Recall. Alice Foster Coursework Aim: To determine the effect that interference will have on Memory recall. Hypothesis: Interference will cause an effect on memory recall. IV: Interference DV: Successful Memory Recall Introduction What is memory? Cara Flanagan (97) gives the following definitions of memory, * The mental function of retaining data i.e. learning. * The storage system which holds the data. * The data that is retained. We use our memory all the time without even realising it. We remember how to read, write, open doors, shut doors etc, for normal every day things. In order for us to remember information, memory goes through 3 stages: * Encoding * Storage * Retrieval Encoding is how we store information into our memories and can be done in 3 forms: - * Visual - You see the image you are trying to recall * Acoustic - You hear the information in your mind * Semantic - You understand and remember the meaning of information stored Storage is the information that we have encoded, in our minds, until we need it. Retrieval is when we use the information that we have encoded and stored. There are 3 main theories to explain Memory. Richard Atkinson and Richard Shiffrin (1968) proposed the Multi-Store Model. They suggested that memory was a series of processes. Sensory memory is where information is stored for a few seconds, until it is encoded. If information is not encoded it will fade from the sensory memory. ...read more.

* The researcher will thank everyone for taking part and will debrief everyone after the experiment is complete. PARTICPANTS: As the researcher was carrying out the experiment during a band rehearsal, it was more convenient to use opportunity sampling as participants were easily accessible as they all belonged to the band. "Anyone who is available, and agrees to take part in research can become a participant." (B Woods 2004) This type of sampling was economical and very quick. In order to have a bigger and more accurate representative of the population, Random Sampling may have been used, but opportunity sampling proved to be more appropriate to this experiment. 10 adults participated in this experiment. MATERIALS: Cue cards for the researcher Two lists of fifteen words Twenty sheets of A4 paper Ten pens A radio A mobile phone Notes on Debriefing A stopwatch An assistant to help with interference (As previously arranged) PROCEDURE: Before the experiment began, the researcher set up the room by spacing 10 single desks around the room and placing an A4 page and pen on each desk. The experiment was carried out in a separate room, in the same building of the band rehearsal. When everyone was seated, the researcher thanked everyone for agreeing to take part in the experiment. The researcher also reminded everyone that they were free to leave at anytime. The researcher then read out a list of standardised instructions. The researcher asked the participants if they wanted these instructions read out again. The participants agreed that this was not necessary. ...read more.

This can also be known as the Serial Position effect. Evaluation The participants responded well to the study. The researcher had everything set up and planned out in advance which helped the experiment to go smoothly. The participants all understood the instructions but unfortunately some participants did begin to make up words when they couldn't remember anymore, even though the researcher did emphasise that it was not a 'race or competition'. As the researcher mentioned previously, it may have been better to have used random sampling in order to give a more accurate representative of the population. But this was not possible due to time restraints. It may have been interesting to have carried out this experiment again by giving participants the words to see when learning. This may have changed results as participants would have been encoding the information visually as opposed to acoustically. The results could have been hampered due to nerves as participant would not know what this experiment is for until debriefing. Conclusion This experiment supported the Hypothesis that was Interference will cause an effect on memory recall. As only a small sample was used, the researcher would not be confident about generalising the results although the researcher's results were consistent with theories and other studies. The only problem the researcher found was that participants were extremely nervous before they began. When they began condition B, the participants may have relaxed or possible guessed what the experiment was for therefore could bias the results. The researcher learned through further reading for this study the importance and vast affect that rehearsal and interference may have on Memory recall. ...read more.