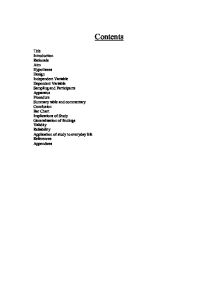 An experiment to test the existence of the rehearsal loop using interference with numbers.

Contents Title Introduction Rationale Aim Hypotheses Design Independent Variable Dependent Variable Sampling and Participants Apparatus Procedure Summary table and commentary Conclusion Bar Chart Implications of Study Generalisation of findings Validity Reliability Application of study to everyday life References Appendices Title An experiment to test the existence of the rehearsal loop using interference with numbers. Introduction This study is based on the area of cognitive psychology, in particular, theories of memory. William James (1890) argued that one must distinguish between two types of memory - primary and secondary. We now refer to these as short-term memory (STM) and long-term memory (LTM) respectively. This leads onto the Atkinson and Shiffrin model of memory which was one of the earliest information processing models to be based on James's distinction. Atkinson and Shiffrin (1968,71) claimed that memory consisted of three memory stores which were the sensory store, the short-term store and long-term storm. A stimulus received by our senses (such as reading words) passes through the stores in that order with some information being lost en route. Any new information retained will always pass through in this way. According to the Atkinson and Shiffrin model, whether or not information passes into the LTM from STM depends on whether it is rehearsed. If you want to remember something, you repeat it several times in your head therefore increasing the likelihood that it will be transferred into LTM. The main emphasis on this multi-store model of memory is on structure rather than process - concentration is on the way in which our memory is structured, not how it is processed. ...read more.

the affects of parties, coffee, lessons etc. which might have affected their results. > Ethically I met the guidelines of the B.P.S. RESULTS Table showing how many trigrams each participant recalled Participants without interference Participants with interference 7 4 11 6 8 4 5 5 Number of trigrams recalled out of 15 6 3 9 6 10 4 6 3 7 5 9 2 Mean 7.8 4.2 Range 6 (11-5) 4 (6-2) Mode 9,7,6 4 The results show that more trigrams were recalled from participants who had no interference to contend with. This can be shown most clearly by the mean (7.8) and mode (9,7,6) which have considerably higher numbers than the mean (4.2) and mode (4) of participants who had interference. Another good indicator of the difference between results is the highest value. This value is five higher (11) in the no interference group compared to with interference (6). The lowest value is three higher (5) compared to 2. Apart from that '5' value in the no interference group, there does not appear to be any anomalies. The bar chart, however, is the clearest portrayal of the results. The chart compares the two mean values of the groups and because one (7.8) is 3.6 values higher than the groups with interference (4.2), this is very obvious on the chart. The value 7.8 is just over half of the maximum number of trigrams that could be recalled; 4.2 is just over a quarter of the maximum number of trigrams that could be recalled. ...read more.

Neither could the mood of the participant, as some were happy to perform the experiment whereas others were not and they found it tedious - this could have affected the results. I was able, though, to make sure the participant had no previous exposure to the experiment because I used independent groups instead of repeated measures. Generally though, the fact that my procedure is so clearly stated makes the study easy to replicate. Improving the reliability comes down to the setting of the experiment, which is not accessible to the general public. It would be useful therefore to have performed the experiment in a quite place other than that in a common room, as this would not be available to most people. Application of the study to everyday life Certainly the experiment itself is totally unrealistic and therefore can't be applied to everyday life. However, the concept of testing the rehearsal loop can be applied. This is the basic reason behind every exam - to discover how well the candidate has been able to transfer information between the memory stores. Problems with the rehearsal loop could result in a lack of information being transferred to LTM and therefore poor revision techniques and poor results. The use of different forms of interference would have been interesting as well. The use of television and music as ways of distraction would have shown to what extent people are affected by everyday forms communication and entertainment. This could be linked to people who drive with very loud music playing and are therefore often the cause of many road crashes through their negligence of those around them. ...read more.