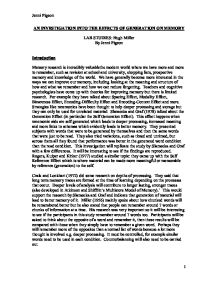 An investigation into the effects of generation on memory

AN INVESTIGATION INTO THE EFFECTS OF GENERATION ON MEMORY LAB STUDIES: Hugh Miller By Jenni Pigeon Introduction Memory research is incredibly valuablethe modern world where we have more and more to remember, such as revision at school and university, shopping lists, prospective memory and knowledge of the world. We have generally become more interested in the ways we can improve our memory, including looking at the meaning and structure of how and what we remember and how we can reduce forgetting. Teachers and cognitive psychologists have come up with theories for improving memory but there is limited research. For example they have talked about Spacing Effect, Modality Effect, Bizareness Effect, Encoding-Difficulty Effect and Encoding-Context Effect and more. Strategies like mnemonics have been thought to help deeper processing and storage but they can only be used for unrelated material. Slamecka and Graf (1978) talked about the Generation Effect (in particular the Self Generation Effect). This effect happens when mnemonic aids are self generated which leads to deeper processing, increased meaning and more links to schemas which evidently leads to better memory. They presented subjects with words that were to be generated by themselves and then the same words that were just to be read. They also tried variations, such as timed and untimed, but across them all they found that performance was better in the generated word condition than the read condition. ...read more.

Most of the participants were students. Materials Two lists of words were produced, one with a list of words with the first letter of its opposite as a trigger for the generated word and the other with a list of words deliberately similar to the generated list. Participants recorded the words they remembered on a plain sheet of paper (see appendices). Design An independent groups design was used. There was no independent or dependent variable as an exploratory study was carried out. It was counterbalanced by presenting the two lists in an alternate order to each participant to avoid order effects. Procedure The investigation was carried out in quiet surroundings and participants were tested individually. They were informed briefly about the aim of the study, given standardised instructions (including having the right to withdraw at any time) and presented with the first list. After this, they were asked to do an interference task which involved counting backwards from 100. They then wrote down as many words as they could recall in as much time as they needed. The procedure was repeated for the second list. Participants were debriefed and data was collected. Results The results of the procedure: Read list Generate list 8 10 10 10 7 8 12 12 Task N Generate Read Amount of words t significant? ...read more.

This could be useful in a further replication. Another strength of this investigation was that counterbalancing was used to reduce order effects. Subjects were given the generated list and the read list in alternate orders. It should be brought to our attention that other confounding variables may have affected the accuracy of the results, such as subject variables and demand characteristics. This type of memory experiment is fairly common in psychology and participants may have deliberately changed their memory in accordance with what results were expected. The study was also not ecologically representative. Opportunity samples are generally more representative than other sampling methods, but mostly students were used. Students are not representative of the population and there is evidence that they are not good participants. It is likely that the primary and recency effects have occurred in this study and also in Slamecka and Graf's. The study could become more reliable and be improved by using more people (and a more representative sample) and perhaps by using a larger variation of words (different lists) and then calculating the mean. It is possible that the words we used we easier to remember than others. It could also be made more real to life. The study shows that memory does depend on processes at the time of learning and that if we are able to generate the material we need to remember more then it is more likely to be stored for longer or transferred to the long term memory. Jenni Pigeon 1 ...read more.