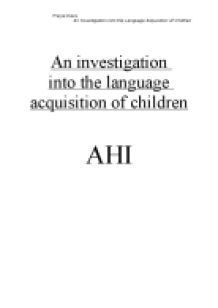 An investigation into the language acquisition of children

﻿Freyja Davis An Investigation into the Language Acquisition of Children An investigation into the language acquisition of children AHI An investigation in the language acquisition of children Proposal; The investigation I plan to carry out is a study into the language acquisition of children based upon Piaget?s theory of cognitive development; a comprehensive theory about the nature and development of human intelligence, the theory focuses primarily on a child?s development in terms of information processing, conceptual resources, perceptual skills and language learning. Piaget claimed that the idea that cognitive development is at the centre of a person and language is contingent on cognitive development. Piaget suggested that children go through four separate stages in a fixed order that is universal in all children, he declared that all these stages differ not only in the quantity of information acquired at each, but also in the quality of knowledge and understanding at that stage. Piaget suggested that movement from one stage to the next occurred when the child reached an appropriate level of maturation and was exposed to relevant types of experiences. ...read more.

I believe I will find, when conducting this investigation that my results will correlate with Piaget?s findings and research that suggests a child?s language is contingent on cognitive development and the difference between the child and adult was qualitative rather than quantitative. Methodology; The way I intend to collect data is through means of interviewing a child at each different stage?, the interview will consist of asking a few basic questions of which would require the child to see from another?s perspective, test Piaget?s theory of conservation, test a child?s deductive logic and the egocentrism of the subject. I will also make observations into the social class of the children at different age, by studying accents and spoken pronunciation. I will make comparisons into the investigations which have been carried out based upon Piaget?s theory and my own investigations which I will conduct on the basis of the other investigations ? which will provide me with more information to make comparisons with and analyse. Analysis; Noam Chomsky had the belief that children are born with an inherited ability to learn any human language ? claiming that certain linguistic structures which children use so accurately must be already imprinted on the child?s ...read more.

As Chomsky challenged ideas about syntactic structures, rejecting the notion that all language must be learned afresh by children everywhere, instead he claimed there is a ?hard-wired? syntax which enables a child to grasp the basic workings of language ? which is evident in the child?s language use, an example being the use of irregular verbs as they do not follow any specific rules to form the past tense children are taught rules in which they are to add ?-ed? to the past tense verbs, which results in the child beginning to exhibit overgeneralization errors such as ?swimmed? which is an example in the transcript. Controversially, Chomsky?s concept that children use an innate ?language acquisition device? to select grammar from a limited range of options clashes directly Jean Piaget?s views on language acquisition being part of overall cognitive development in children. Chomsky had an idea of ?generative grammar? which presupposes the brain operating in a binary fashion for example like in a computer. Critics such as Piaget suggests that this idea conflicts with evolutionary anthropology that views language acquisition as a gradual adaptation of the brain and vocal chords ? not a spectrum of binary choices. ...read more.