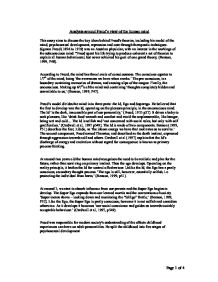 Analysis around Freuds view of the human mind

Analysis around Freud's view of the human mind This essay aims to discuss the key ideas behind Freud's theories, including his model of the mind, psychosexual development, repression and cure through therapeutic techniques. Sigman Freud (1856 to 1939) was an Austrian physician, with an interest in the workings of the subconscious mind. "Freud spent his life trying to produce coherent a set of theories to explain all human behavioural, but never achieved his goal of one grand theory, (Benson, 1999, P48). According to Freud, the mind has three levels of consciousness. The conscious equates to 1/7th of the mind, being 'the awareness we have when awake.' The pre-conscious, is a boundary containing memories of dreams, and causing slips of the tongue. Finally, the unconscious. Making up 6/7ths of the mind and containing 'thoughts completely hidden and unavailable to us,' (Benson, 1999, P47). Freud's model divides the mind in to three parts: the Id, Ego and Superego. He believed that the first to develop was the Id, operating on the pleasure principle, in the unconscious mind. The Id 'is the dark, inaccessible part of our personality,' (Freud, 1933 p27). It drives a baby to seek pleasure, like 'drink food warmth and comfort and avoid the unpleasureable, like hunger, being wet and cold... The Id is selfish and 'not concerned with social rules, but only with self gratification,' (Cardwell et al, 1997 p549). ...read more.

This results in the requirement for an ego to develop, 'and as such has important implications in the personality later in life,' (Cardwell et al, p550, 1997). The phallic stage, from 3 to 5 years, starts when children become aware of s****l differences and become curious about their own genitals. Benson (1999) explains that boys will develop differently to girls from here on. Boys will develop Oedipus Complex and unconsciously experienced a sequence of sub stages. Firstly he will develop a strong desire for his mother. Then, after noticing the strong (s****l) bond between her and his father, he will become deeply jealous of his father and hate him. The boy's fear of his father uncovering these thoughts instils a fear of the ultimate punishment, castration. The boy resolves that to avoid castration by pleasing his farther, and at the same time impress his mother, he must become like his father. This is called identification. Girls, having unconsciously concluded that they have already been castrated, do not develop the same fears. Though, 'since their mother is the same, girls also end up identifying, i.e. adopting their mother's morality and gender roles. This was always rather vague' and known as the Electra Complex (Benson, 1999, p56). Freud believed this was followed by the latent stage. Most of Freud's theories are based on s****l activity. Therefore, with the resolution of the Oedipus Complex resulting in a break in s****l conflict, he decides this stage of development must be latent or in active. ...read more.

However, it is now widely believed that little reliance can be placed on the accuracy of what people claim whilst in a hypnotised state, because hypnosis makes the human mind too open to suggestion. The other problem with the method being, that many people are difficult, or in fact impossible, to hypnotise. In modern psychology, Freud's theories are still highly controversial. 'His case studies read like more stories, than empirical findings' and many psychologists, including Popper, claimed this made his theories scientifically untestable. Modern thinking tends to agree with Carl Jung, (1875-1961) who 'after working closely with Freud from 1906 to 1913, decided he placed too much emphasis on s*x,' (Benson, 1991, p56+59). However Freud did help many patients to understand and cope with their problems i.e. Dora, Anna O, and Wolfman. He had an enormous effect on modern Society and changed the way people think about themselves and others. His groundbreaking theories still form the foundation of our beliefs today and he truly earned himself the title 'Founding Father of Psychology.' Mrs Jodieanne Dainter. I314 words, not including direct quotes. Reference list Books Benson. C, (1999) Introducing Psychology. Cambridge, Icon Books LTD. Cardwell, M. Clark, L. & Meldrum, C. (1997) Psychology for A Level, London, Harper Collins. Eysenck. M, (2005) Psychology for A2 Level, Hove Psychology Press. Freud, S, (1933) New Introductory Lectures on Psychoanalysis. New York. W.W. Norton. Web Pages Palaci. J, Light Hypnotic Trance in Psychoanalytic Psychotherapy, 14/11/2009 http://americanmentalhealthfoundation.org/a.php?id=39 ?? ?? ?? ?? Page 1 of 4 ...read more.