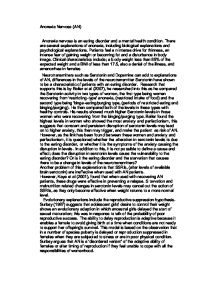 Anorexia Nervosa (AN) Anorexia nervosa is an eating disorder and a mental health condition. There are several explanations of anorexia, including biological explanations and psychological explanations. Patients feel an intense drive for thinness, an intense fear of gaining weight or becoming fat and a disturbance in body image. Clinical characteristics include; a body weight less than 85% of the expected weight and a BMI of less than 17.5, also a denial of the illness, and amenorrhea in females Neurotransmitters such as Serotonin and Dopamine can add to explanations of AN, differences in the levels of the neurotransmitter Serotonin have shown to be a characteristic of patients with an eating disorder. Research that supports this is by Bailer et al (2007), he researched into this as he compared the Serotonin activity in two types of women, the first type being women recovering from 'restricting-type' anorexia, (restricted intake of food) and the second type being 'binge-eating/purging type, (periods of restricted eating and binging/purging). He then compared both of the levels in these types with healthy controls. ...read more.

This model is based on the observation that in a number of species puberty is delayed or reproduction suppressed in females when they are subjected to stress or are in poor physical condition. Surbey argues that AN is a 'disordered variant' of the adaptive ability of females or alter timing of reproduction if they feel unable to cope with all the responsibilities of womanhood. This hypothesis is supported by the observation that menarch (the start of puberty) is delayed in prepubertal girls with AN. Also, since amenorrhoea is a typical characteristic of AN, this means that reproduction is effectively suspended in anorexic females. However, female mammals experience a very high and often unappreciated rate of reproductive failure. Among human pregnancies alone, over 50 per cent fail between conception and parturition, and the majority of these failures are unexplained, how can we be certain that the failure of reproduction is due to the 'ability to suppress'. The Evolutionary explanations also include the 'adapted to flee' hypothesis (AFFH). ...read more.

AN would have functioned more effectively in ancestral conditions yet outside the ecological setting in that it evolved in, it can be deadly. ---- General evaluation of biological explanations In this section it is important that you refer to issues and debates. There are sociocultural explanations for AN. Cultural ideals and the media, and ethnicity and peer influences are some of them. It is widely believed that Western standards of attractiveness are an important contributory factor to the development of AN. Studies have shown that many teenagers, girls especially, have a distorted view of their body and are unhappy with their weight. Gregory et al (2000) did a survey, The National Diet and Nutrition Survey of Young People; he found that 16% of 15-18year old girls in the UK were 'currently on a diet'. The media also play a big part in influencing people about weight and body image, and that maintained by Western adolescents. Such as, the view of thin models portrayed on magazine covers and television and the drive for thinness in Western teenage girls. ...read more.