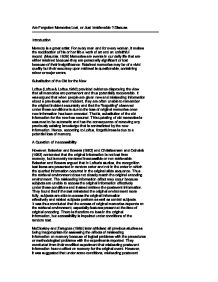 Are Forgotten Memories Lost, or Just Irretrievable ?.Discuss. ============================================================= Introduction Memory is a great artist. For every man and for every woman, it makes the recollection of his or her life a work of art and an unfaithful record. (Maurois, 1929) Memories are events in our daily life that are either retained because they are personally significant or lost because of their insignificance. Retained memories may be of a vivid quality but their accuracy upon retrieval is questionable, containing minor or major errors. Substitution of the Old for the New Loftus (Loftus & Loftus,1980) provided evidence disproving the view that all memories are permanent and thus potentially recoverable. It was argued that when people are given new and misleading information about a previously seen incident, they are often unable to remember the original incident accurately and that the "forgetting" observed under these conditions is due to the loss of original memories once new information has been encoded. That is, substitution of the old information for the new has occured. This updating of old memories is assumed to be automatic and has the consequence of removing any previously existing knowledge that is contradicted by the new information. ...read more.

Incidents which cause considerable stress or physical injury may impair or prevent recall. However, studies which involve the use of hypnosis to enhance recall were not found to be significant. Forensic hypnotists have also consistently alleged that new information have been provided in most cases where hypnosis have been employed. However, further discussion have suggested that both accurate and inaccurate information are elicited during the forensic interview, probably due to a number of factors unrelated to the hypnotic intervention. The numerous differences between the typical hypnotic and non-hypnotic interview means that users of forensic hypnosis cannot know whether the hypnotic intervention was a factor influencing the performance of a witness. This consideration, and the likelihood that users of forensic hypnosis will selectively attend to and remember the successes, can adequately account for their strong beliefs in the efficacy of hypnosis. The empirical evidence pertaining to the effects of hypnosis on the recall of events after several months have elapsed is also somewhat inadequate, but suggests that hypnosis does not facilitate remembering under these circumstances. Hence, it is evident that hypnosis fails to offer any insight into the existence of "forgotten " memories. ...read more.

Any situation resulting in the false recognition of new information as previously experienced may be explained in terms of similarities in surface features and semantic properties between what is remembered and fact. Conversely, failure to remember an event would also be due to a simlarity effect because actual events merge into and become indistinguishable from generic "events" compatible with what the person thinks could have happened. Hence most autobiographical memories are true but inaccurate. These errors, though, may be mediated by an accurate "self-portrait" because not every memory can be accepted as one's own. The sense of familarity created by an event is associated with a judgement that the event is true to what most likely occured and consistent with what should have happened. Conclusion In conclusion, forgotten memories are probably neither lost nor irretrievable. The conditions on retrieval may possibly influence the process. The integration of other information may also affect and modify the original information. Also, personal judgement and self-depiction of the event may also distort the memory of the event. Hence, it is a host of inter-webbed factors that may cause the phenomenon of "forgetfulness" and not one explanation is totally satisfactory. ...read more.