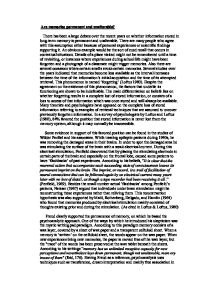 Are memories permanent and unalterable?

Are memories permanent and unalterable? There has been a large debate over the recent years on whether information stored in long-term memory is permanent and unalterable. There are many people who agree with this assumption either because of personal experiences or scientific findings supporting it. An obvious example would be the sort of cued recall that occurs in contextual situations. Details of a place visited might not be remembered until a time of revisiting, or instances where experiences during school life might have been forgotten and a photograph of a classmate might trigger memories. Also there are several occasions where certain smells evoke certain memories. Several studies over the years indicated that memories become less available as the interval increases between the time of the information's initial acquisition and the time of its attempted retrieval. This phenomenon is named 'forgetting' (Loftus 1980). Despite the agreement on the existence of this phenomenon, the factors that underlie its functioning are shown to be indefinable. The main differentiation on beliefs lies on whether forgetting results in a complete lost of stored information, or consists of a loss to access of that information which was once stored and will always be available. Many theorists and psychologists have opposed on the complete loss of stored information referring to examples of retrieval techniques that are assumed to uncover previously forgotten information. ...read more.

While early studies did not find any changes from the normal adult EEG patterns (True & Stephenson, 1951), resent evidence provided by Raikov (1983) showed return during hypnotic regression but posed inherent methodological difficulties to the extent that the findings could not provide convincing support. Even if hypnotism achieves it's goal which is reviving a repressed inaccessible memory, it is more likely because of interpersonal relationship existing between hypnotist and patient and not because of the mysterious power that hypnosis is attributed with (Hilgard, 1977). Furthermore several other experiments not only failed to produce reviving of experiences but showed that patients under hypnosis provided descriptions even if they were asked to progress to an age of 70 or 80 years while being younger. Other hypnotised patients also showed a return to prenatal life or even past incarnations. Interference can play a big role in determining the amount of forgetting between the information's initial acquisition and the time of its attempted retrieval. It occurs when one set of learned information interferes with another set, and results to a retrieval failure or an alternation of the initial information (memory). Two kinds of interference exist, the retroactive referring to interference caused by the learning of later information with the recall of earlier ones, and the proactive referring to interference caused by the learning of earlier material with the recall of later ones. ...read more.

His short term memory was normal while he could not transfer information into the long term memory and if he could, he was unable to retrieve it. A similar example is this of Clive Wearing who was an expert on music knowledge. After the destruction of his hippocampus by a virus he suffered severe anterograde amnesia. Like H.M, he was unable to have memories of events which occurred after the destruction of the hippocampus, but he preserved his musical ability. The only difference with H.M was that his capacity for remembering events of his earlier life was extremely inconsistent. By outlying all these years of empirical studies, I wanted to emphasize the complexity of memory as a human cognition mechanism. What all these studies suggested, is that there is no certain answer to the question on whether memories are permanent as there has not yet been, a complete understanding of the function of memory. This question may be unanswerable in principle, but I will favor the position which regards forgetting as a retrieval failure for the purpose of this essay. Throughout the essay I demonstrated that memories are permanently stored in our minds and can be recovered with several techniques. This cannot include all memories as a hole but certainly the majority of them. On the other hand memories may be altered with interference such as misleading information, as it was clearly shown by Loftus' studies. ...read more.

The writer has covered this subject well and has included a variety of studies to back up their argument. Some of the work could be written more simplistically to show that the writer understand what they are writing about and to avoid being accused of plagiarism. However, the writer has included most of the evidence for and against memory being permanent and unalterable. If the comments are taken on board then the writer could achieve full marks for this essay.