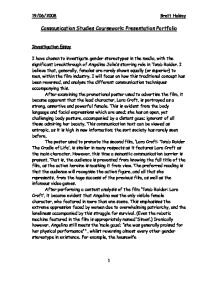 Investigation Essay I have chosen to investigate gender stereotypes in the media, with the significant breakthrough of Angelina Jolie's starring role in Tomb Raider. I believe that, generally, females are rarely shown equally (or superior) to men, within the film industry. I will focus on how this traditional concept has been reversed, and analyse the different communication techniques accompanying this. After examining the promotional poster used to advertise the film, it became apparent that the lead character, Lara Croft, is portrayed as a strong, assertive and powerful female. This is evident from the body language and facial expressions which are used; she has an open, yet challenging body posture, accompanied by a distant gaze; ignorant of all those admiring her beauty. This communication text can be viewed as entropic, as it is high in new information; the sort society has rarely seen before. The poster used to promote the second film, 'Lara Croft: Tomb Raider The Cradle of Life', is similar in many respects as it features Lara Croft as the main character. However, this time a semantic communication barrier is present. That is, the audience is prevented from knowing the full title of the film, as the action heroine is masking it from view. The preferred reading is that the audience will recognise the action figure, and all that she represents, from the huge success of the previous film, as well as the infamous video games. After performing a content analysis of the film 'Tomb Raider: Lara Croft', it became evident that Angelina was the only visible female character, who featured in more than one scene. This emphasises the extreme oppression faced by women due to overwhelming patriarchy, and the loneliness accompanied by this struggle for survival. (Even the robotic machine featured in the film is appropriately named 'Simon'.) Ironically however, Angelina still meets the 'male gaze'; "she was generally praised for her physical performance"�, whilst reversing almost every other gender stereotype in existence. ...read more.

(20-30 seconds) Furthermore... I will analyse aspects of non-verbal communication which are evident in the following film, 'Lara Croft: Tomb Raider The Cradle of Life'. This follows on from some of the effects created by the previous film, i.e. Angelina Jolie is now instantly recognised Lara Croft, a larger than life character. (30-40 seconds) Summary I will summarise some of the main effects of the film and link them back to the main title, posing the question whether 'females are now superior to males?' (within the film industry) (10-20 seconds) Questions and Answers Finally, there will be a question and answer session, in which members of the audience can ask any questions which they feel are appropriate to the topic at hand, and I will do my best to answer both clearly and concise. (5 minutes +) Analysing my Microsoft PowerPoint presentation in greater depth As I created my presentation using Microsoft PowerPoint, I was able to include several graphics and animations, which would otherwise be unavailable. Consequently, I feel it is necessary to analyse these in greater depth, stating the sources used and possible effects they might have on the audience. Slide 1: This title features first, with the 'compress' custom animation, causing the words to squeeze in from the sides. This subtitle is set to 'descend' after the previous one, creating the effect of it being subordinate, yet still eye catching. (Background image from: http://screenshots.softonic.com/s2de/15000/15317/0_15317.jpg) This image effectively represents what my presentation is about. It features Angelina Jolie/Lara Croft's seductive gaze which connotes the stereotypical view associated with women in the media. Slide 2: This image features first as it demonstrates how women need to be perfect and look 'ideal', in order to feature in the media (Source: : http://celebrity-hotvideo.10ad.org/wp-content/uploads/2006/11/angelina_jolie_resize.jpg) The writing 'whips' along, i.e. flies in from the left as if it's being written. This gives the audience time to consider what is being presented to them, before I continue speaking. ...read more.

I believe there was a logical order to my presentation. I started with some background debates, followed by the 'introduction' of Tomb Raider to the audience, allowed them to form their own opinions about the character, and finally gave a brief summary of what I had discussed. I feel that I managed to communicate with the audience considerably well, and felt superiorly confident when elaborating upon my findings, which were from a textual and content analysis of Lara Croft 'material'. I found my PowerPoint presentation to be extremely useful, as it contained my organised thoughts and ideas of what to discuss. Additionally, it provided an extra visual stimulation for the audience, so they didn't just have to rely on their auditory senses. I found the audience to be highly responsive when it came to answering questions, which was an enormous relief, and I was extremely glad of their generous participation. This sparked new comments and ideas that I had previously not considered, and found myself feeling confident when giving my opinions on the subsequent topic. Whilst reviewing my personal performance, I was quite pleased to learn how coherent and professional I behaved. I found myself adopting a similar style to what a teacher might take and actively embracing the different social norms and expectations which apply to such a role. I have learnt that it is important to be concise in the message that you are trying to encode, in order to ensure that it is decoded correctly, that is in the desired way. In order to improve my presentation, I would have shortened the length of the video clip. This is because it seemed to consume quite a large part of my presentation, although it did prove quite thought provoking and accurately summarised all of the ideas that I had presented to the group. In conclusion, I believe my presentation was a complete success as I managed to effectively communicate with the audience, removing any barriers to communication that might exist, and remained in a total sense of self-control throughout. ...read more.