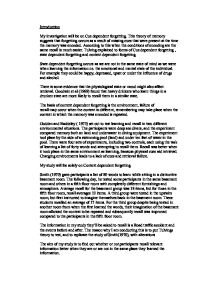 4 9. 3 10. 6 11. 5 12. 4 13. 6 14. 3 15. 7 Mean Average 4.8 Appendix Instructions You are about to take part in an experiment in which you will read a scenario about a road traffic accident. You have one minute to read the scenario. You have the right to withdraw from the experiment at any time. Scenario Stuart was driving a silver Land Rover down the M25. Police Constable John Anderson clocks Stuart's speed at 86 mph in his undercover green Vauxhall Astra, so he turns on his siren and goes after Stuart. Stuart panics and speeds off. He accidentally crashes into a red Ford Fiesta belonging to a 27 year old female. This was a minor crash with no injuries suffered. Below are 10 questions on the Scenario you have just read. You have two minutes to answer the questions. 1. What was the name of the Offender 2. What car was the offender driving 3. What colour was their car. 4. What speed were they driving at 5. What was the name of the Police officer. 6. What road did the incident take place 7. What colour was the Policeman's car 8. What kind of car did the offender crash into 9. How old was the victim What make was the Police Officers ?? ?? ?? ?? ...read more.