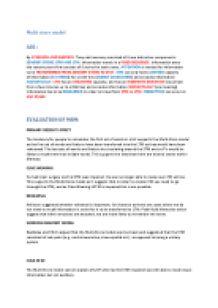 ﻿Multi-store model A01: By ATKINSON AND SHIFFRIN. They said memory consisted of three distinctive components: SENSORY STORE, STM AND LTM. Information travels in a FIXED SEQUENCE. Information enter the sensory store first-consists of 5 stores for each sense. ATTENTION is needed for information to be TRANSFERRED FROM SENSORY STORE TO STM. STM can only hold a LIMITED capacity of information (5-9 ITEMS) for a brief time (ABOUT 20 SECONDS) and encodes information ACOUSTICALLY. LTM has an UNLIMITED capacity, and has an INDEFINITE DURATION (could last from a few minutes up to a lifetime) and encodes information SEMANTICALLY (via meaning). Information has to be REHEARSED in order to travel from STM to LTM. FORGETTING can occur at ANY STAGE. EVALUATION OF MSM: PRIMARY RECENCY EFFECT The tendency for people to remember the first set of words in a list supports the Multi-Store model as the first set of words are likely to have been transferred into the LTM as they would have been rehearsed. ...read more.

Visuo-Spatial sketchpad (inner eye) deals with visual and spatial information. A02: DUAL TASK Baddeley carried out an experiment where there were two groups. One group had to follow a pointer on a board (visual task) whilst answering questions about the angles of different letters (another visual task). The other group was required to also carry out the pointer task (visual task) whilst recalling a string of digits (verbal task). The second group performed better than the first group as the tasks required them to use different components of the STM ? the Visuo-Spatial sketchpad and Phonological loop. The first groups couldn?t complete the task properly as the two tasks were using the same part of the STM which has limited capacity. This proves that there is more than one component in STM. CASE OF KF Due to a motorcycle accident KF impaired his STM, as a result he experienced problem with the auditory verbal information but not with verbal information. ...read more.

There was no broken glass in the video, but participants asked the question with ?smashed? were likely to say they had seen broken glass. This supported Loftus? claim on accuracy of recall on leading questions. VIDEO CLIPS There have been a number of criticisms that have been made in regards to Loftus? study. A major flaw is that Loftus study lacks ecological validity. It is based on participant?s recall of video clips and had this been a real life event, then recall is likely to have been more accurate. For instance, Cutshall interviewed 13 people who had witnessed an armed robbery in Canada. He then re-interviewed those four months later after the crime and included 2 misleading questions. Despite the misleading questions, the witnesses provided accurate recall that matched the initial reports. This shows that the wording of a question may not affect the accuracy of someones recall. OTHER FACTORS Remember to argue that there are factors that determine how accurate someone?s account of an event is for instance what was the visibility like? And the age of a witness and so on. ...read more.