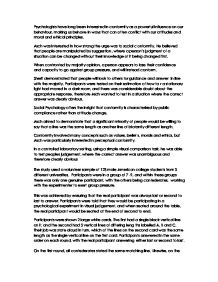 Psychologists have long been interested in conformity as a powerful influence on our behaviour, making us behave in ways that can often conflict with our attitudes and moral and ethical principles.

Asch was interested in how strong the urge was to social conformity. He believed that people are manipulated by suggestion, where a person’s judgment of a situation can be changed without their knowledge of it being changed first.

When confronted by majority opinion, a person appears to lose their confidence and capacity to go against group pressure, and will instead conform.

Sherif demonstrated that people will look to others for guidance and answer in line with the majority. Participants were tested on their estimation of how far a stationary light had moved in a dark room, and there was considerable doubt about the appropriate response, therefore Asch wanted to test in a situation where the correct answer was clearly obvious.

Social Psychology offers the insight that conformity is characterized by public compliance rather than attitude change.

Asch aimed to demonstrate that a significant minority of people would be willing to say that a line was the same length as another line of blatantly different length.

Conformity involved many concepts such as values, beliefs, morals and ethics, but Asch was particularly interested in perceptual conformity.

In a controlled laboratory setting, using a simple visual comparison task, he was able to test peoples judgement, where the correct answer was unambiguous and therefore clearly obvious

The study used a volunteer sample of 123 male American college students from 3 different universities.  Participants were in a group of 7-9, and within these groups there was only one genuine participant, with the others being confederates, working with the experimenter to exert group pressure.

Participants were shown 2 large white cards. The first had a single black vertical line on it, and the second had 3 vertical lines of differing lengths labelled A, B and C.
Their job was state aloud in turn, which of the lines on the second card was the same length as the single vertical line on the first card. Participants answered in the same order on each round, with the real participant answering either last or second to last.

There were 18 trials in all, 12 of which were critical in that the confederates gave the unanimous incorrect answer. In the control condition the real participant would always state the correct line (majority of the time).

The experiment was stopped if the participant grew suspicious or had appeared to have guessed the aims of the research. This however only happened in a few cases and the results were not included.

Post experimental interviews revealed two main reasons why participants conformed. The first was that they didn't want to be the odd one out, and the second reason was that their perception and judgement had been distorted and so they believed the answer of the majority. It was also noted that in the majority who conformed, they still continued privately to trust their own opinions and judgement, but changed their public behaviour in order to avoid disapproval from other members.

Asch concluded that conformity is a powerful influence on our behaviour, as some were willing to conform even when the correct answer was unambiguous.

He noted that the strong desire for intelligent and well meaning young people to conform and give an incorrect answer in a clear cut situation, raises questions about education and the values that guide conduct.

Asch also noted that an important finding came from his research. In over two thirds of trials, participants remained independent and didn't conform to the majority wrong answer. In those who participated it was agreed that independence is far preferable to conformity.

This demonstrates individual differences in response to group pressure and shows that independence can override the inclination to submit to the majority viewpoint.

A strength of the methodology used by Asch is that laboratory experiments provide findings with good scientific validity. They provided objective, measurable and quantitative data and used a clear IV, which would be the majority opinion, and a clear DV, which would be the percentage of participants conforming. This means that the findings drawn from the use of this method also have good internal validity.

Furthermore, the use of laboratory experiments means that the findings and conclusions drawn on conformity can be replicated. This is because an IV, the majority opinion, is manipulated to see its effect on the DV, which is the percentage of participants willing to conform. Also, extraneous variables were strictly controlled, and the controlled environment has allowed others like Smith and Bond to replicate to research and produce similar results. Therefore, a cause and effect conclusion can be drawn due to the variables being controlled, and the replications strengthen support for the original findings into conformity.

Also, Orne criticised laboratory experiments for producing demand characteristics. It is possible that the participants guessed the aims of the experiment, or received cues as to the type of behaviour that was desired from them, and so changed their behaviour which would have ultimately flawed the effects of a majority opinion have an effect on conformity levels.

Perrin and Spencer described Asch’s study as a ‘child of it’s time’ because they used the same procedure but with British students, and found that there was only 1 out of 386 trials that conformed. This casts the doubt on the validity of Asch’s study, suggesting that it may be historically/culturally biased. Asch’s findings and conclusions drawn about conformity could just be situation specific to a 1950s America, where independence was not encouraged.

Perrin and Spencer carried out a sub sequent study that found similar results to Asch when the costs of non conformity were high. Youths on probation were used as participants and probation officers were used as confederates. The study was in line with the context of Asch’s and provides valuable insights that when the costs of independence are high, people will publically conform.

A meta-analysis by Smith and Bond from 1952 to 1994 used the same or similar procedure to Asch’s. Individualistic and Collectivist cultures were tested along with their conformity levels. Smith and Bond found that the collectivist culture had a higher level of conformity than the individualistic culture, and also found that conformity levels had declined steadily since Asch’s original study in the 1950s. Despite the differences, some of Asch’s variations are in line with the findings of the meta analysis, such as higher conformity levels with females, and with larger majority sizes. This shows that conformity is not a stable tendency, but is unpredictable and influenced by many external factors.

Asch made a number of variations to his study, which showed that many factors affect the influence of majority on a person and the pressure to conform. For example, the size of the majority increased the conformity levels, and the presence of an authority figure decreased the conformity levels.
It is clear that majority groups do have a significant effect on behaviour, but there are also many other factors and so no firm conclusions can be drawn.

This is an excellent coursework. It covers everything required with regards to the psychology of conformity, normative social influence and the study on said phenomena by Asch. The candidate also concerns a n umber of other studies and theories which ...

This is an excellent coursework. It covers everything required with regards to the psychology of conformity, normative social influence and the study on said phenomena by Asch. The candidate also concerns a n umber of other studies and theories which only fortifies there answer as it shows the examiner the candidate possesses the ability to qualify their ideas with empirical evidence. The study by Asch is not an easy one to explain, but this candidate shows a clear and accurate knowledge of the study, correctly identifying the aim, the procedure, the methodology and the results. Perhaps a more professionally-worded explanation of the laboratory-controlled conditions and the low mundane realism of the lab experiment could be added to improve this section, but nonetheless everything is accurate and well-presented.

The Level of Analysis is perfect - just the right amount is present, A good, strong pair of strengths, which are nicely balanced with similarly strong weaknesses. The candidate explains the strength/weakness well, outlining the positive/negative effects on the results of the studies, and then citing the study that said evaluative point features. It's written very succinctly and flows well from point to point. I recommend anyone struggling with effective psychology evaluation to read this candidate's work.

The Quality of Written Communication is excellent. From both an English and Psychology perspective, their are no causes for concern with regard to use of appropriate grammar, correct spelling and accurate use of punctuation. The candidate also very proficiently uses a number of psychology-related terminology - an excellent way to show the examiner that you are comfortable to express your ideas about psychology using the language of the professionals.