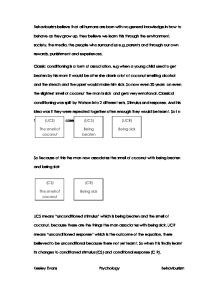 Behaviourism and Conditioning.Behaviourists believe that all humans are born with no general knowledge in how to behave as they grow up, they believe we learn this through the environment.

Behaviourists believe that all humans are born with no general knowledge in how to behave as they grow up, they believe we learn this through the environment, society, the media, the people who surround us e.g. parents and through our own rewards, punishment and experiences. Classic conditioning is a form of association, e,g when a young child used to get beaten by his mom it would be after she drank a lot of coconut smelling alcohol and the stench and the upset would make him sick. So now even 30 years on even the slightest smell of coconut the man is sick and gets very emotional. Classical conditioning was split by Watson into 2 different sets. Stimulus and response. And his idea was if they were repeated together often enough they would be learnt. So in the young child's case So Because of this the man now associates the smell of coconut with being beaten and being sick UCS means "unconditioned stimulus" which is being beaten and the smell of coconut, because these are the things the man associates with being sick. UCR means "unconditioned response" which is the outcome of the equation, there believed to be unconditional because there not yet learnt. So when it is finally learnt its changes to conditioned stimulus (CS) and conditional response (CR). Operant conditioning is when behaviour becomes more or less likely as a result of the consequences whether they be reward or punishment. ...read more.

He then began to cry as he associated the rat with the loud banging noise. Little Albert by the end of the experiment was afraid of all the objects that originally didn't faze him. This is because he now associates them with the loud banging noise. Operant conditioning B.F Skinner used rats in his experiments to prove to others that operant conditioning worked through reward and punishment. A rat was placed in a box with a tube attached to the outside of the box full of food but the only way for the rat to get the food was to press a lever inside the box. The rat accidently pressed the lever at first to which a pellet of food fell into the box. The rat soon learnt that pressing the lever is what he must do to receive food, and because the food was seen as positive reinforcement the rat began pressing the lever whenever he wanted food. Another one of skinners experiments also involved rats. He placed a rat into a cage with an electric floor and every time the rat pressed the lever the electric would stop. The rat soon linked the two together and pressed the lever as much as it could; this is what skinner called positive punishment as the bad behaviour stopped when the rat did something positive. ...read more.

Aversion Aversion therapy comes from classical conditioning it's mainly used for addiction or wrong behaviour. It is a type of therapy in which by the end of it the client will associate smoking with something horrible and not want to do it anymore. They do this buy simply putting something negative with the behaviour. With smoking its very well known that if the cigarette is dipped in horrible tasting and smelling solution when you pick it up to smoke it makes you feel sick. Done often enough, when you leave the clinic or therapy the next time you pick a cigarette up it will make you think of the horrible solution and how it tasted which then results in you not wanting to smoke. This therapy is very similar to the experiment on little Albert. Strengths and weaknesses Flooding and aversion are 2 very good therapies and very affective. Flooding usually has a very good success rate but on some occasions it could make the phobia worse or even put the patient in danger e.g. losing the fear of spiders and picking up a deadly spider without knowing. But it's known to be a very fast way to deal with phobias. Aversion is the best therapy used for addictions or crimes such a paedophilia and again has a very fast success rate. Both of these therapies need structure and constant but many people are learning how to do self therapy at home which is resulting in them being worse off than before. ?? ?? ?? ?? Keeley Evans Psychology Behaviourism ...read more.