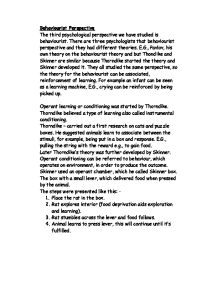 Behaviourist Perspective The third psychological perspective we have studied is behaviourist. There are three psychologists that behaviourist perspective and they had different theories. E.G., Pavlov, his own theory on the behaviourist theory and but Thondike and Skinner are similar because Thorndike started the theory and Skinner developed it. They all studied the same perspective, so the theory for the behaviourist can be associated, reinforcement of learning. For example an infant can be seen as a learning machine, E.G., crying can be reinforced by being picked up. Operant learning or conditioning was started by Thorndike. Thorndike believed a type of learning also called instrumental conditioning. Thorndike - carried out a first research on cats and puzzle boxes. He suggested animals learn to associate between the stimuli, for example, being put in a box and response. E.G., pulling the string with the reward e.g., to gain food. Later Thorndike's theory was further developed by Skinner. Operant conditioning can be referred to behaviour, which operates on environment, in order to produce the outcome. Skinner used an operant chamber, which he called Skinner box. The box with a small lever, which delivered food when pressed by the animal. The steps were presented like this: - 1. Place the rat in the box. 2. Rat explores interior (food deprivation aids exploration and learning). 3. Rat stumbles across the lever and food follows. 4. Animal learns to press lever, this will continue until it's fulfilled. After these four stages, the concept of trail and error occurs and reinforces behaviour into positive reinforcement, which means 'in rewarded terms'. ...read more.

Behaviour modification Operant learning from Skinner, which is widely used. The emphasis is on desired behaviour to be rewarding with praise and ignoring the behaviour problem. The termed modification of behaviour is in order to modify behaviour, which is important to: - 1. Define behaviour, which needs reducing E.G., running round the classroom. 2. Identify and define behaviour that we want increasing E.G., sitting still. 3. Identify what is reinforcing the problem behaviour E.G., becoming centre of attention. 4. Try to change it by ignoring or punishing the undesired response and try to reinforce the desired behaviour by praise. Eventually the child should realise is it necessary to sit down. The child may then learn to sit for long periods of time. Consistency is vital to all adults, which must adapt the same approach, which is adapted both at school and at home. The approach is therefore to: - * Make experiments as to what is expected of the child for each period. * Ignore behaviours which interfere with learning, a punishment must be withdrawal of some positive reinforces. * To give praise and attention to behaviours which encourage learning to tell the child why it is being praised. Modelling therapy This is based on social and observational learning. The child is shown examples of desired behaviour and sees others being rewarded for the types of behaviour. People behaving in an unacceptable manner will be shown as being punished. The example can be characters in books, TV/films; role-plays watching peoples behaviour such as children and adults. Evaluation The perspective and the theory on behaviourist, for me was amusing and interesting. ...read more.

The educational can also come from the therapeutic because you are also learning the theories. An educational response could be that you study the books on the Pavlov and Skinner and become fully aware of the two theories and what you have learned from them. The weaknesses can be that the two theories ignored emotions, motivation and drives in people because these cannot be observed. This weakness can only be from Skinners theory because he studied humans. The learning is operant conditioning, Skinner saw people response to whatever to be tested, on, this was only shown by the stimuli but a reaction of the response but no other, E.G., emotions and motivation because these could not be observed. Skinner only saw how humans behave which is followed a reward and learn to repeat it. For example the child puts sweet in its mouth and enjoyed then the child tends to repeat the action. This shows that the emotions, motivation and drives were ignored, because you could not see how the person reacts to the subject. The same that it presents very mechanisms views on humans on just passive receivers of stimuli. I have learned quite a fair bit on behaviourist perspective and its theories. I found it rather difficult to write about but I think it was a result of lack of concentration as well as not spending enough time on the theories of the behaviourist perspective. Overall I think I have a basic knowledge on the theories and determined to study it more to make myself aware on how the theories concepts and points. This would help me in my further assignments and understanding of the subject. ...read more.

Overall this essay has some relevant points on theory and research that need developing. The other main point is that there is a need for planning before writing to ensure a coherent essay that is succinct and relevant. 3*