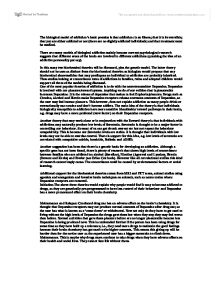 The biological model of addiction's basic premise is that addiction: is an illness; that it is irreversible; that you are either addicted or not (there are no slightly addicted individuals) and that treatment must be medical. There are many models of biological addiction mainly because current psychological research suggests that different areas of the brain are involved in different addictions (quashing the idea of an addictive personality per say). In this essay two biochemical theories will be discussed, plus the genetic model. The latter theory should not be seen as distinct from the biochemical theories as biologists would propose that any biochemical abnormalities that may predispose an individual to addiction are probably inherited. Thus studies looking at concordance rates of addictions in families, twins and adopted children would support all three of the models being discussed. One of the most popular theories of addiction is to do with the neurotransmitter Dopamine. Dopamine is involved with our pleasure/reward system. Anything we do of our volition that is pleasurable increases Dopamine. ...read more.

However like all correlational studies this kind of research cannot imply cause. The concordance could be caused by environmental factors or social learning. Additional support for the biochemical theories comes from MRI and PET scans, animal studies using agonists and antagonists and invasive brain techniques on animals, such as neuro toxins where Dopamine receptors are removed. Initiation-The above three theories would explain why people would find it easy to become addicted to drugs, as they are genetically pre-programmed to have less control of their behaviour and Dopamine has a more pronounced effect on their brain chemistry. Maintenance and Relapse: Continued drug use has an adverse effect on the brain's chemistry. It is thought that Dopamine receptors may not produce normal amounts of Dopamine after drug use; so the user has what is known as a 'come down' or withdrawal. Now not only do they have to get used to living without the high levels of Dopamine the drugs gave them but when they stop they may feel worse then before. ...read more.

Relapse may therefore occur because the user may not be able to cope with months of depression. This can be even worse for users who start as teen agers as the brain is thought to be permantly damaged. It may takes years for the brain to regenerate Dopamine pathways in other arrears of the Mesolimbic system. There are countless instances of people who live in exactly the same environment(two siblings) but addiction is only present in some cases. Bio explanations help to account for inherent vulnerabilities and susceptibilities i.e. at the initiation stage, some people are predisposed towards addictive behaviour and also provide a person as to why some people may be more resistant to addiction treatment and more prone to relapse. A deeper problem with neurochemical explanations is the neglect of the social contexts of the behaviours. The pleasures and escape associated with taking a drug are highly varied and depend on the person, dose, social situation they are in and the wider social context of the society they live in. ...read more.

This essay includes quite a lot of information but it lacks good organisation and the writing seems hurried. Start with a good introduction to the subject of addiction with a definition or two. Then the main content needs to be planned better explaining what is meant by the biological model. The writer could then go on to look at the different biological theories citing various studies. The essay then should draw all the information together and weigh up the pros and cons in a final conclusion.