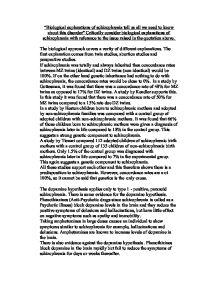 It has been noted that Clozapine (a new drug for schizophrenia) blocks dopamine activity less then Phenothiazies and therefore should be less effective in treating schizophrenia. However, there is growing support for the view that Serotonin as well as dopamine plays a part in producing the symptoms of schizophrenia and Clozapine blocks both of these neurotransmitters. A study by Kammen shows that on certain occasions taking amphetamines can lead to a reduction in the symptoms of schizophrenia. The evidence for the dopamine hypothesis is correlational, therefore it cannot be concluded that schizophrenia is caused by an excess of dopamine. Another explanation is Neuroanatomy, there seems to be evidence that there are structural differences in the brains of schizophrenia and non-schizophrenics. Brown for example has noted that many schizophrenics have lighter brains with enlarged ventricles. However, a study by Pearlson has failed to replicate these findings. It is also possible that the ventricular enlargement could be the result rather than the cause of schizophrenia. ...read more.