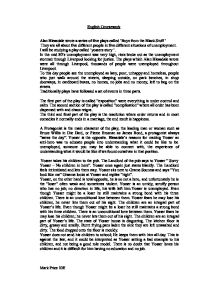 English Coursework Alan Bleasdale wrote a series of five plays called 'Boys from the Black Stuff ' They are all about five different people in five different situations of unemployment. I will be studying a play called 'yossers story '. In the mid 80's unemployment was very high, riots broke out as the unemployment stormed through Liverpool looking for justice. The plays which Alan Bleasdale wrote were all through Liverpool, thousands of people were unemployed throughout Liverpool. To this day people see the unemployed as lazy, poor, unhappy and homeless, people who just walk around the streets, sleeping outside, on park benches, in shop doorways, in cardboard boxes, no homes, no jobs and no money, left to beg on the streets. Traditionally plays have followed a set of events in three parts. The first part of the play is called "exposition" were everything is under control and calm. The second section of the play is called "complication" where all order has been dispensed with and chaos reigns. The third and final part of the play is the resolution where order returns and in most comedies it normally ends in a marriage, the end result is happiness. ...read more.

At the beginning of the play we find Yosser in the Department of Unemployment where he stares blankly at the Clerk as the Clerk tries desperately to attract Yosser's attention by repeating his name, The Clerk does this many times but Yosser stares blankly at him. Yosser said bye and walks away. Yosser follows Maureen, grabbing her and pushing her up against a lamp post. He brings his head back in a motion to head b**t her, Maureen moves and Yosser head butts the lamppost. It hurt his quite bad as he yelled out. Do you have a good Dentist?" Yosser asks the Electrician as he comes to turn of Yosser's electricity. Yosser is very violent towards him when he is only trying to do his job. Yosser does not comprehend this. Maureen is thought to be something of a liar, her speech in the interview room was almost like it was planned, after she had finished her interview she asked "is that enough" as if is that enough to get his children taken from him. But I really do feel bad Yosser because he has nothing. Maureen has turned against him by lying in the interview room, and the scar face police man and his colleagues beat him up quite badly till he no strength left. ...read more.

Gorge is being rowed by a person with his back turned to us, this shows Gorge doesn't control his life any more. Moey is rowing Maureen's boat showing that Moey is in control of Maureen. Maureen just misses Yosser as she rows pass him. It is almost like Maureen tried to hit Yosser under the water, to get rid of him or even to kill him. All though through out the story it seems that there in a constant barrier in front of Yosser and anyone he wants to communicate with. Yosser is almost like he is insulated.Yosser says that he used to build sand castles, then he said that 'that's all he has ever done' almost saying that he is a sand castle getting bushed away over and over.Yosser finds himself in a lot of different problems. By this time Yosser has lost his wife he house and his children. Yosser is left with nothing. Yosser is a typical anti-hero, the main characters but he is how just another person in the play. Yosser struggles to even to even identify himself, he has a false identity crisis, and he doesn't know who he is. At the end Bleasdale really tries to emphasise the misfortune that Yosser has come across. Bleasdale really shows what unemployment is really like. Bleasdale has a good understanding of unemployment. Mark Price 10E ...read more.