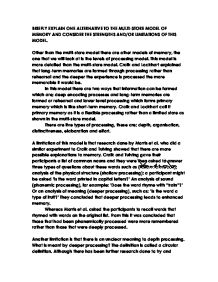 BRIEFLY EXPLAIN ONE ALTERNATIVE TO THE MULTI-STORE MODEL OF MEMORY AND CONSIDER THE STRENGTHS AND/OR LIMITATIONS OF THIS MODEL.

BRIEFLY EXPLAIN ONE ALTERNATIVE TO THE MULTI-STORE MODEL OF MEMORY AND CONSIDER THE STRENGTHS AND/OR LIMITATIONS OF THIS MODEL. Other than the multi-store model there are other models of memory, the one that we will look at is the levels of processing model. This model is more detailed than the multi-store model. Craik and Lockhart explained that long-term memories are formed through processing rather than rehearsal and the deeper the experience is processed the more memorable it would be. In this model there are two ways that information can be formed which are; deep encoding processes and long-term memories are formed or rehearsal and lower level processing which forms primary memory which is like short-term memory. Craik and Lockhart call it primary memory as it is a flexible processing rather than a limited store as shown in the multi-store model. There are five types of processing, these are; depth, organisation, distinctiveness, elaboration and effort. ...read more.

The definition is called a circular definition. Although there has been further research done to try and extend on the meaning of depth, explaining it as an increasingly complex interaction with the information that is to be remembered. OUTLINE TWO EXPLANATIONS OF FORGETTING IN STM AND DECIDE WHICH IS ONE IS BETTER. PRESENT EVIDENCE TO SUPPORT YOUR DECISION. One explanation to forgetting in short-term memory is the decay theory. The decay theory looks and at memory in terms of the memory trace or otherwise known as a memory engram. This is the physical representation of a memory which is suggested that this engram decays if it is not rehearsed. It is supported by the research done by Peterson and Peterson, where no rehearsal was done the information was forgotten (not recalled) after at the most of 18 seconds. A second explanation is the displacement theory. The displacement theory explains forgetting in the short-term memory in terms of older information being overwritten by newer information. ...read more.

Such as in Peterson and Peterson's study the numbers that the participant was counting could have displaced the information rather than it being lost due to no rehearsal. Although research done by Reitman tried to overcome the problem of displacement and instead of asking participants to do a task that may replace information she asked the participants to listen for a tone, therefore the information should not be replaced. After 15 seconds recall for five words dropped by 24% suggesting that decay is apparent. But a question is whether or not it is one or the other, further research by Waugh and Norman who changed the speed in which they presented information, and it was suggested if displacement was the key factor speed should not matter because the number of items were the same. They found that the speed only had a small effect on recall. Whereas Shallice found that recall was better when information was presented faster and the effect was stronger when the probe was moved. This suggests that both decay and displace are apparent when forgetting but displacement is the more important. ...read more.