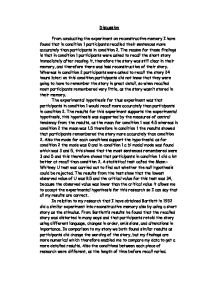 In relation to my research that I have obtained Bartlett in 1932 did a similar experiment into reconstructive memory also by using a short story as the stimulus. From Bartlett’s results he found that the recalled story was distorted in many ways and that participants retold the story using different language, changes in order, omissions, and alterations in importance. In comparison to my story we both found similar results as participants did change the wording of the story, but my findings are more numerical which therefore enabled me to compare my data to get a more detailed results. Also the conditions between each piece of research were different, as the length of time before recall varied. Bartlett did also find that distortions became even more pronounced over time, this was similar to my experiment as the results show in condition 2 when participants recalled the story 24 hours later the sentences were more distorted than in condition 1.

Another piece of research that I can compare mine to is research done by Wynn and Logie 1998, the findings from this experiment are very different from the findings in my research. The findings for Wynn and Logie’s experiment shows little distortions to the memory over time, as the episode of information was personal and real to the individual, whereas my experiment had a short story which wasn’t related to the participant in any way and therefore they are least likely to remember it and there would be more distortions.

The main weaknesses of my method is that my sample is andocentric as there were more females than males taking part in this experiment, because of this factor the results may lack validity as they cant be applied to all sexes. Another weakness for my method is that I conducted a lab experiment and there are many disadvantages for doing this as it lacks ecological validity, as the experiment is not true to real life situations, also because the experiment was a lab experiment participants are aware of the scientific and controlled situation and therefore they may change their behaviour accordingly which can cause demand characteristics and this could have an affect on my results. Also my experiment was open to sources of bias and these may have come from the investigator, the environment or the participants. In this experiment the main sources of bias that came from the participants were that they were looking round at each other’s recalled story, which therefore this could mean that the results were copied, which makes my results lack validity. Another source of bias came from the environment, as outside the experiment lab there was lots of noise coming from other students, therefore the outside environment may have affected the participant’s concentration to reading and recalling the story. Another weakness for my method is that the experiment is based on English students and is therefore culturally biased which means the experiment is ethnocentric as the results wont apply to students in other cultures and other countries this also makes my results lack in validity. Also another weakness of this experiment is that it lacks population validity as there were only 22 participants over all therefore the results wont be the same if there were more people taking part.

In relation to the weaknesses of my experiments the improvements that can be made are by using counterbalancing which is a method of overcoming confounding variables. For my experiment I should have split up the participants so that they didn’t have a chance to look at each others recalled story, also another improvement that could have been made is choosing a room which was quieter and also to do the experiment at another time so that no other students were passing through outside the experiment room. For this experiment I would also incorporate students from different ethnic backgrounds and gender groups so that I can have a better range of results and so they will have a higher validity as they can be applied to the wider population.

If I was to extend the study I would change the method slightly, I would most definitely use more participants so that there was a bigger range of results to compare, I would also have a bigger range of males and females and an equal amount of each gender in the experiment therefore it wont be gender biased. Also I might have two conditions to compare females and males and to do this I would ask them both to recall immediately and 24 hours later which would therefore make the design into matched pairs, by doing this I would get different yet more detailed results on each gender and it would make the experiment more fair. I would do this so I could see whether females or males are different in reconstructing their memory, and to see whether they vary in the accuracy of recall.

My results don’t really tell me anything that I don’t already know in a narrative respect as I already know that over time there are distortions of the memory which makes recall harder and it makes participants use a different order and layout to a story. However in a numerical format it allows me to compare the results of the 2 conditions in a lot more detail, as I have been able to do a statistical analysis, which has enabled me to correctly accept the hypothesis that I gave at the start of the investigation. This experiment enables me to apply the results I have found to give a detailed explanation of how reconstructive memory works and how it is constructed and it also enables me to explore the diversity of the results and it enables me to apply the results to other areas of reconstructive memory such as Eye Witness testimony.