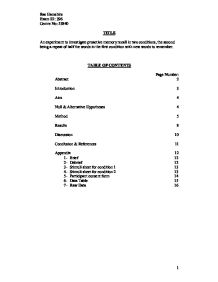 TITLE An experiment to investigate proactive memory recall in two conditions, the second being a repeat of half the words in the first condition with new words to remember. TABLE OF CONTENTS Page Number: Abstract 2 Introduction 3 Aim 4 Null & Alternative Hypotheses 4 Method 5 Results 8 Discussion 10 Conclusion & References 11 Appendix 12 1- Brief 12 2- Debrief 12 3- Stimuli sheet for condition 1 13 4- Stimuli sheet for condition 2 13 5- Participant consent form 14 6- Data Table 15 7- Raw Data 16 ABSTRACT The background theory based on research by McGeoch in 1942 which supported proactive interference, the experiment involved two conditions with independent measures, one group had a rest period, one had to learn word list A. then both conditions were given list B to learn, and asked to recall list B. the results showed better accuracy and more correctly recalled words in the first condition, the controlled group. And in the second condition, the experimental group, proactive interference occurred as list A, caused them to forget and make mistakes in list B. The aim of this study is to carry out an experiment to investigate proactive interference on memory recall. The alternative hypothesis is that proactive interference will have a negative effect on memory recall of the word lists, and the null hypothesis for this experiment is that proactive interference will make no significant difference on memory recall of the word lists. The experiment will have two conditions, and repeated measures will be carried out. The target population for the experiment were students at Truro College, none of which studied psychology, and all ages 16-19, and 15 participants were needed, all were to be used in both conditions. The data collected was a score out of ten. In condition 1 the 15 participants answered 145/150 correctly together, with a mean average of 9.67, and in condition 2 140/150 were correctly answered between them all, with a mean average of 9.33. ...read more.

Before they participated everyone was asked if they were or had studied psychology, or had any understanding of the coursework and experiments beings carried out. PARTICIPANTS The target population for the experiment were students at Truro College, none of which studied psychology, and all ages 16-19. All participants were found in the main college canteen. The sampling method used was opportunity sampling because it was the most convenient, in the circumstances of a college canteen random sampling would not of been sufficient as students would not want to wait to complete the experiment. The easiest and most reliable way of carrying out the experiment was for students in the canteen to be randomly asked if they wouldn't mind spending a little time to take part in an experiment. They would leave the canteen and go into a quiet room to eliminate noise distractions and cheating, then they would be briefed and the experiment would begin. Stratified sampling would not of been as straight forward to carry out, and only 15 participants were needed so from a hall of at least 150, 15 is only 1/10th and chosen at random, the results are still very much valid. TASK & MATERIALS Choice of task was related to an interest in a previous experiment carried out in a class experiment, because it seemed like solid evidence that could be backed up by another piece of research carried out on a very similar format with the same principles, just a slightly different design. Materials used in this experiment were a stimulus sheet per participant per condition, A5 paper was used to save paper as all that was needed on the stimulus sheet was the 10 words to the start of each pair, and room for the participants to write their answers to complete each pair, and 30 stimulus sheets were needed. An example of stimuli 1 and 2 are shown on appendix 3 and 4. ...read more.