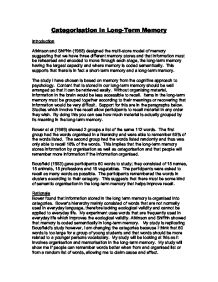 Categorisation in Long-Term Memory Introduction Atkinson and Shiffrin (1968) designed the multi-store model of memory suggesting that we have three different memory stores and that information must be rehearsed and encoded to move through each stage, the long-term memory having the largest capacity and where memory is coded semantically. This supports that there is in fact a short-term memory and a long-term memory. The study I have chosen is based on memory from the cognitive approach to psychology. Content that is stored in our long-term memory should be well arranged so that it can be retrieved easily. Without organising material, information in the brain would be less accessible to recall. Items in the long-term memory must be grouped together according to their meanings or recovering that information would be very difficult. Support for this are in the paragraphs below. Studies which involve free recall allow participants to recall material in any order they wish. By doing this you can see how much material is actually grouped by its meaning in the long-term memory. Bower et al (1969) showed 2 groups a list of the same 112 words. The first group had the words organised in a hierarchy and were able to remember 65% of the words listed. ...read more.

10 participants in control group and 10 in experimental group. 5. Then first the control group was brought into a room that was available. 6. A list of disorganized words was placed in front of them for 30 seconds and then taken out of sight again. 7. Within 3 minutes the participants were to recall as many words as they could. 8. This was repeated with the next 10 participants in an experiment with an organized list of categorized words (condition 2). 9. Once the results were obtained I record how many words each participant recalled and tallied how many people recalled how many words. To see the words used in the study, go to appendix 2 Controls: By using independent designs, some extraneous variables were controlled. Order effects were prevented since different participants were allocated in different conditions. Having clear and concise standardised instructions reduced confusion. The procedures were standardised to reduce any experimenter effects. The room was kept in a constant temperature to reduce it from possibly affecting participant's memory. Students were ranged from 13-14 years old. Other noise from outside the room may have distorted the results and therefore all windows and doors were closed so that as little noise as possible was allowed into the room. A consent letter is enclosed at the back of this coursework. ...read more.

Generalisation of findings Target population is the age and group of people an experimenter plans to generalise their findings on. In my experiment the target population was Island School students between the ages 13-14 years old. This was hard to generalise due to the sampling method. The method was biased because only students who were available and around at that time were asked to participate. This could be improved if a larger sample of students were used and not only people who were 'free' to participate. My experiment only involved 20 people, which was too little to generalise a school of 1500 students. It was hard to generalise beyond the target population, as there are individual differences, psychological differences and cultural differences between much of the population. In addition my sample was too small to generalise beyond target population. Applications of everyday life It was found that an organised list of categorized words would be more efficient to remember than a randomly placed list of words. This can be applied to everyday life, for example when teachers teach children they have to teach in a systematical order so it is easier to recall the majority of information. As for a high school there is a syllabus which is organized by categorising the same type of information together. This is the most efficient way for remembering information and recalling it for exams. ...read more.