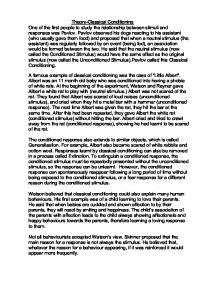 Theory-Classical Conditioning One of the first people to study the relationship between stimuli and responses was Pavlov. Pavlov observed his dogs reacting to his assistant (who usually gave them food) and proposed that when a neutral stimulus (the assistant) was regularly followed by an event (being fed), an association would be formed between the two. He said that the neutral stimulus (now called the Conditioned Stimulus) would have the same effect as the original stimulus (now called the Unconditioned Stimulus).Pavlov called this Classical Conditioning. A famous example of classical conditioning was the case of "Little Albert". Albert was an 11 month old baby who was conditioned into having a phobia of white rats. At the beginning of the experiment, Watson and Rayner gave Albert a white rat to play with (neutral stimulus.) Albert was not scared of the rat. They found that Albert was scared of loud noises (unconditioned stimulus), and cried when they hit a metal bar with a hammer (unconditioned response). The next time Albert was given the rat, they hit the bar at the same time. ...read more.

The child's association of the parents with affection leads to the child always showing affectionate and happy behaviours towards the parents, therefore learning a loving response to them. Not all behaviourists accepted Watson's view. Skinner proposed that the main reason for a response is not always the stimulus. He believed that, whatever the reason for a behaviour appearing, if it was reinforced it would appear more frequently. Theory- Operant Conditioning Skinners view of conditioning is known as Operant Conditioning. It stresses the importance of the consequences of peoples behaviour. Thorndike's law of positive effect says that the outcome of a behaviour will act to strengthen or reinforce that behaviour. For example a child trying to open a door which is blocked by an object will try different methods to get out. Eventually they will move the object and realise that moving the object allowed them to open the door. In the same situation in the future, they will try moving the object a lot sooner, as they received positive reinforcement when they did it previously. ...read more.

Skinner devised experiments on reinforcement using the Skinner Box. For negative reinforcement, the subject (these tests were usually performed on a rat or pigeon) had to actively avoid an unpleasant event, usually a small electric shock. There is a warning, such as a buzzer, before the shock. The subject has to press a lever when the buzzer sounds to remove the shock. The shock is a negative event, so the subject will learn to avoid it In positive reinforcement studies, the reinforcement is obvious to the observer. However it is harder to see in negative reinforcement studies as the outcome is avoidance of, not contact with, the reinforcer. This led psychologists to theorise that reinforcements act as "drive reduction". A drive is a biological instinct, such as hunger .Experiencing fear when the shock happens creates a "drive" for safety, and that drive is satisfied when the subject presses the lever and avoids the shock. However, when the shock is made unavoidable, the subject not only fails to learn avoidance behaviour, but is less likely to attempt avoiding in a similar situation. This is known as "learned helplessness" and is suggested to be a factor in human depression. ...read more.

Although good points are made the style is completely wrong and more analsis is needed.While the student covers both classical and operant conditioning they do nothing to compare them or talk about the differences between them. By putting them each ...

Although good points are made the style is completely wrong and more analsis is needed.While the student covers both classical and operant conditioning they do nothing to compare them or talk about the differences between them. By putting them each under different headings rather than making it a combined essay it seems disjointed and as though it is regurgitating facts instead of producing an argument describing what the main points of classical and operant conditioning are and how they differ. There should be a clear introduction which lays out the basics of classical and operant conditioning then they can go on to discuss different studies on these types of learning before concluding to sum up the main points and compare the two. This then shows a neat and clear structure rather than merely information without any framework.

While it's good to see studies given, it would be very useful to have dates as this shows further research into the study. Also when mentioning a study (such as that of Pavlov's dogs in the first paragraph) it's important to actually show you fully know the study. While it was Pavlov's assistant bringing the food that caused the response of saliva he then went on to train them to salivate when they heard a bell. Also in that first paragraph it's important to mention it's a conditioned response as the correct terminology must be used. Good discussion of the Baby Albert study (covers both unconditioned stimuli/response and conditioned stimuli/response) and of the ideas of generalisation and extinction. A brief mention about second order conditioning would also show further understanding of the topic. In using their own example with the child and the door in their discussion of operant conditioning it shows that they understand how the theory works which is good. It would be useful to show how the Skinner Box can be used for positive reinforcement as well as negative reinforcement. I would also mention shaping and chaining as these are two of the key things which help distinguish operant from classical conditioning. With both classical and operant conditioning I would mention more the rates at which they occur and can be distinguished, especially as with operant conditioning you have all the different amounts of reinforcement (whether they gain reinforcement each time they press a buzzer, every 5th time they press the buzzer, once every minute etc.) By doing this you can then look at the differences between the two types of conditioning and compare them.

While on the whole the spelling is fine there are many instances where the writing really lets the student down. Take for example the end of paragraph 3, the final sentence makes little sense. Also you should never include bullet points in your essay, essays are formal and bullet points are very informal. Although there is a nice link shown between classical and operant conditioning in Watson and Skinner, by separating it out into two headings there is no sense of a combined essay. Some of the paragraphs are only a sentence; by planning ahead and having your points thought out you can make full paragraphs which then run sensibly into one another rather than the disjointed feel this has at the minute. These technical issues are letting down an essay which has some very good knowledge in as it is making it jumbled and trickier to read.