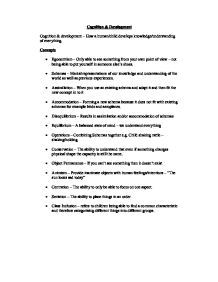 Cognition &amp; development How a human/child develops knowledge/understanding of everything.

Cognition & Development Cognition & development - How a human/child develops knowledge/understanding of everything. Concepts * Egocentrism - Only able to see something from your own point of view - not being able to put yourself in someone else's shoes. * Schemas - Mental representations of our knowledge and understanding of the world as well as previous experiences. * Assimilation - When you use an existing schema and adapt it and then fit the new concept in to it * Accommodation - Forming a new schema because it does not fit with existing schemas for example birds and aeroplanes. * Disequilibrium - Results in assimilation and/or accommodation of schemas * Equilibrium - A balanced state of mind - we understand everything * Operations - Combining Schemas together e.g. Child shaking rattle - shaking/holding. * Conservation - The ability to understand that even if something changes physical shape the capacity is still the same. * Object Permanence - If you can't see something then it doesn't exist * Animism - Provide inanimate objects with human feelings/intentions - "The sun looks sad today" * Centration - The ability to only be able to focus on one aspect. * Seriation - The ability to place things in an order * Class Inclusion - refers to children being able to find a common characteristic and therefore categorising different things into different groups. Jean Piaget - Piaget's Cognitive developmental theory There are four stages of development. ...read more.

Lev Vygotsky * Vygotsky introduced social interaction, culture and context of the situation * It is social interaction which is one of the processes that develop our ability to think * Vygotsky introduced the zone of proximal development Current ability Full potential * The zone of proximal development refers to the child's capability when provided with assistance E.g. If a child is doing a puzzle and is stuck, someone places the next piece of the puzzle in and then the child is able to carry on. * Vygotsky's 2nd concept is language * Children learn language through "private speech" and the most obvious form is social speech. * Between the ages of 7-8 children start to internalise this speech and then becomes known as intellectual speech * This is an inner voice that helps the individual to plan, regulate and think in order to perform complex tasks. * Young children often use monologues before they internalise speech. * Vygotsky's 3rd concept is Scaffolding * This is a framework given by someone more knowledgeable than the child to provide assistance whilst working towards their Zone of proximal development. Evaluation Wood and Middleton * 12 mothers were asked to teach their children of 4 years how to do a wooden jigsaw. * Whilst teaching their children they were recorded and then the tapes were analysed. * The researchers categorised the different types of help and identified 5 kinds. 1. General Suggestions 2. Specific Verbal Instructions 3. ...read more.

Bruner's theory has attracted a lot of interest specifically in it's application to education. * This theory is a combination of bits of Vygotsky and bits of Piaget. * He supported Vygotsky's emphasis on social experience and cultural interaction. He also emphasised language. * He believed that language was the most important "cultural tool" * Language and cognition are believed to be closely linked. Three things that Bruner introduced in his ideas on teaching - 1. Importance of structure in teaching and learning. * Bruner believed that initially structure is learned unconsciously but in order to learn something, an individual needs to learn the fundamental basics of the subject e.g. Alphabet --> form words 2. Importance of intuitive thinking. * This is done unconsciously without logic or analysis. * Usually where the teacher models the behaviour he/she asks them to guess or estimate. * Children will be encouraged during this process 3. Importance of motivation. * Curiosity and inquisitiveness motivate individuals therefore discovery also leads to motivation. He also introduced a concept called cognitive acceleration and this is where children's cognitive thinking is developed more because you teach them how to think. This is where children's development can be sped up by teaching them thinking skills. CASE - Cognitive acceleration 'through' science education. * They utilized this "case" on year 7 and 8 pupils. * They found that their learning could be accelerated when provided with scaffolding and teamwork in problem solving. CASE also improved GCSE levels on an average from "C" and above in Science. * Adey et al. found that the same method cold be used on year 1 pupils to improve teaching outcomes in London Schools. ...read more.