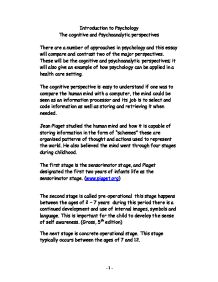 The cognitive and Psychoanalytic perspectives

There are a number of approaches in psychology and this essay will compare and contrast two of the major perspectives.  These will be the cognitive and psychoanalytic perspectives; it will also give an example of how psychology can be applied in a health care setting.

The cognitive perspective is easy to understand if one was to compare the human mind with a computer, the mind could be seen as an information processor and its job is to select and code information as well as storing and retrieving it when needed.

Jean Piaget studied the human mind and how it is capable of storing information in the form of “schemes” these are organised patterns of thought and actions used to represent the world. He also believed the mind went through four stages during childhood.

The second stage is called pre-operational  this stage happens between the ages of 2 – 7 years  during this period there is a continued development and use of internal images, symbols and language. This is important for the child to develop the sense of self awareness. (Gross, 5th edition)

The next stage is concrete operational stage. This stage typically occurs between the ages of 7 and 12.

During this stage, the child begins to reason logically, and organize thoughts coherently. However, they can only think about actual physical objects, they cannot handle abstract reasoning. (www.piaget.org)

The formal operational stage is the fourth and final stage in Piaget's theory. It begins at approximately 11 to 12 years of age, and continues throughout adulthood; although Piaget does point out that some people may never reach this stage of cognitive development. (www.piaget.org)

Piaget felt that all children go through certain stages of `intellectual development in the same order, even though the chronological ages may vary between bright and dull students. (www.piaget.org)

Abnormalities in the cognitive process such as depression or anxiety can be treated through rational emotive therapy (RET). Other treatments may be cognitive behaviour therapy, and behavioural self control. Albert Ellis and Aaron Beck both researched and developed these treatments. (www.psypress.co.uk)

Sigmund Freud and Carl Jung believed the human mind had both conscious and unconscious areas. Freud’s theory was that the unconscious was dominated by the Id. This is called the oral stage and occurs between 0 – 18 months, this part of the personality is the pleasure principle. The ‘Id’ is only interested in self gratification not social rules. (Cardwell et al, 2001)

Superego develops as we become more aware of rules and conventions in society. It has the morality principle and tries to curb the ID. This is also known as the phallic stage, this stage also brings in the Oedipus stage, this is when the child wants to be ‘just like Daddy’ to gain mothers attention.

Two further stages happen after this, the first is called the latency stage, the theory here is that both sexes forget their oedipal attachments and there is a reduction in sexuality in the child.

The genital stage is next, and this is when the harmony within the child’s personality is disrupted by the powerful demands from the Id in the form of heterosexual desires.

The ID and the superego are therefore in direct conflict and need to be managed in a rational way.  If a person is well adjusted they would be likely to develop an ego which would be strong enough to cope with demands from the ID and the superego, allowing expression at appropriate times.

In order for there to be a balance between the ID and the super ego, defence mechanisms are used. These enable reality to be denied and protect the ego from distress which allows the person to cope.

There are various types of treatment that can be used Psychoanalysis, dream analysis, free association and transference are all methods used today to combat symptoms of abnormalities in human behaviour.

An excellent example of psychology being used in a health setting would be with individuals who had an eating disorder such as anorexia nervosa, or bulimia. A cognitive explanation for this may be that an individual cannot be valued unless they have an ideal physical appearance, an example for treatment would be for the individual to undergo therapies designed to develop more realistic ways of thinking about themselves.

A theory that Freud believed was that anyone who suffered from eating disorders would be using it as a substitute for sexual expression and therefore, in psychoanalytic terms, it is a way of repressing sexual impulses. Although there have been a number of studies to investigate the psychodynamic explanations, it is difficult to obtain convincing support.

Both perspectives study the human mind, as well as their behaviour and the way they think. This includes the study of any normalities as well as abnormalities. With the right therapy, the end result would be to develop balance between all stages. This would therefore enable the individual to monitor and control behaviour in what would be classed as a normal and acceptable manner in society.