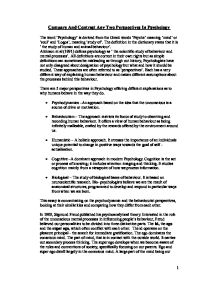 Compare And Contrast Any Two Perspectives In Psychology

Compare And Contrast Any Two Perspectives In Psychology The word 'Psychology' is derived from the Greek words 'Psyche' meaning 'mind' or 'soul' and 'Logos', meaning 'study of'. The definition in the dictionary states that it is ' the study of human and animal behaviour'. Atkinson et al (1991) defines psychology as ' the scientific study of behaviour and mental processes'. All definitions are correct in their own rights but as simple definitions can sometimes be misleading as through out history, Psychologists have not only disagreed about designation of psychology but what and how it should be studied. These approaches are often referred to as 'perspectives'. Each has a very different way of explaining human behaviour and makes different assumptions about the processes behind this behaviour. There are 5 major perspectives in Psychology offering different explanations as to why humans behave in the way they do. * Psychodynamics -An approach based on the idea that the unconscious is a source of drive or motivation. * Behaviourism - The approach restricts its focus of study to observing and recording human behaviour. It offers a view of human behaviour as being infinitely malleable, crafted by the rewards offered by the environment around us. * Humanistic - A holistic approach. It stresses the importance of an individuals unique potential to change in positive ways towards the goal of self -actualisation. ...read more.

who was not interested in the mental processes. He saw no role for the mind and consciousness. The mind and its thought processes were abstract and unobservable and therefore unscientific. Behaviourism is a great challenge to psychodynamic theorists, who believe our behaviour is controlled and processed outside people's awareness. Many critics of Freud say that his experimental research was un-testable. His research was merely descriptive. Psychodynamics try to seek conclusion from qualitative study rather than from scientific studies. Freud's case studies were limited. He mainly studied neurotic middle class Austrians. Which, it was argued is not representative of the general population. There have been many empirical studies of various aspects of Freud's theory. Fisher and Greenberg (1977) concluded that, "it is a complex structure consisting of many parts, some of which should be accepted, others rejected and the rest at least partially reshaped". The Behaviourist needs to test everything! We can confidently say that behaviourism clearly satisfies one of the criteria for a good scientific theory, in that its explanations are simple. There is no need to invent complex hidden processes to explain why behaviour happens. They believe that emotions are qualitative and not easily measurable. An implication of this Slife and Williams (1997) is that although stimuli, responses and reinforcements are essential in behaviourist explanations of behaviour, they are never observed directly. ...read more.

Unconditional response - the bar was struck when Albert petted the rat. Eventually, Albert associated the loud noise with the rat -conditional response. Watson's theory to emotional responses did seem correct, but poor Albert. The things we do in the name of science! As for the psychodynamic perspective we cannot complain about research on animals. However, therapists see themselves as "psychological midwives", present during the "birth" and helping the patient to express his or her true self. All therapists of whatever persuasion (if they are at all effective) influence their patients. Both approaches comprise a situation where one human being (therapist) tries to act in a way that enables another (patient) to act and feel differently. There we have it two perspectives similar in some ways, yet clearly different in approach. There is no doubt that both perspectives have contributed to better understanding both human and animal behaviour. Psychology is a dynamic science. It needs to be studied from many perspectives and it would be na�ve to dismiss any single approach out of hand. Technological advances have had a knock on effect to the way the modern psychologist operates. New theories, notions and experiments are conducted everyday. However, I believe the key to any approach is an open frame of mind. There may be no Holy Grail of psychology but as long as work is carried out and evaluated with an open-minded approach, we may yet discover the key to unlock the mysteries of the mind. 1 ...read more.