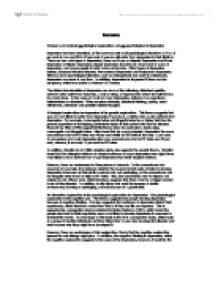 Compare and contrast one biological explanation and one psychological of depression.

Wendler found that the biological relatives of adopted sufferers of major depression were eight times more likely to have suffered from major depression than their adopted relatives. However, there are weaknesses to these pieces of research. In the concordance rate research, for example, it is unknown whether the reason for both pairs of twins to develop depression is because of their similar environment and upbringing, as the concordance rate for dizygotic twins is not as high as MZ twins. Also, the concordance rate for bipolar and unipolar is not 100 per cent, which therefore, suggests that there must be a trigger needed to set off the disorder. In addition, family history risk could be because of similar environment, learning or upbringing, and not because of a genetic link. An alternative explanation is the psychological explanation for depression. One psychological explanation is the cognitive one. This theory suggests that people develop depression because of negative thinking. It is also suggested that sufferers of depression distort their experiences, which therefore makes them feel as if they and life are hopeless. ...read more.

This answer nicely approaches the question, forming an answer that, after an uneasy introduction, tackles the question well, covering all the areas specified. The question instructs candidates to "Compare and contrast", so whilst it is important to include some background ...

This answer nicely approaches the question, forming an answer that, after an uneasy introduction, tackles the question well, covering all the areas specified. The question instructs candidates to "Compare and contrast", so whilst it is important to include some background about the disorder having it's theories of origin compared and contrasted with each other, the detail shown here is not required as it shows no ability to compare or contrast. As a result, no marks are awarded for this section, or any section not explicitly concerning comparison. Were this an exam, this would mean a valuable chunk of time had been wasted and this must be evaded - all candidate MUST read the question, identify the task set, and then write accordingly. Marks are not given for surplus information that does not answer the question.

Elsewhere, the candidate's actual comparison is very brief. They identify only one (decent) similarity and two differences between the two theories (biological and cognitive), meaning it's fairly unbalanced. Few marks are given for the rest of the essay, aside from the evaluation and the use of empirical evidence (studies) to validate the discussion. This is because the candidate clearly either misread or didn't pay enough attention to the question. They only really start scoring marks when they mention the explanations, and even then, too much is written - the most amount of writing should be dedicated to the question's command word "Compare and contrast".

The Level of Analysis is good here. Though it may seem prescriptive or regimented, it's the best way to convey all the necessary information as quickly as possible. Each strength and weakness is applied well and is given context by citing empirical evidence from psychological studies, helping to fortify the answer with facts. This helps candidates show the examiner their abilities to retain extensive amounts of detail in the studies, as this candidate manages to recall the data of the studies which helps prove the theories they write about.

The Quality of Written Communication is good from both a psychology perspective and an English one; only minor errors in punctuation and grammar are made. To correct these, candidate must re-familiarise themselves with the actual purpose of commas - "Depression has been described, as 'the common cold of all psychological disorders" - the comma in this quote is not needed. Comma splice (using commas where unnecessary) can really lower the QWC mark in heavy essay-based courses because it's something you're expected to know at primary school, so I greatly recommend a careful use of commas - this sentence would read far more fluidly and accurately without the comma.