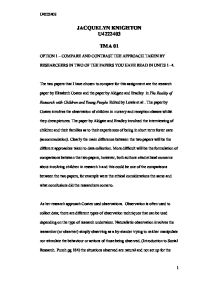 COMPARE AND CONTRAST THE APPROACH TAKEN BY RESEARCHERS IN TWO OF THE PAPERS YOU HAVE READ IN UNITS 1- 4.

OPTION 1 – COMPARE AND CONTRAST THE APPROACH TAKEN BY RESEARCHERS IN TWO OF THE PAPERS YOU HAVE READ IN UNITS 1- 4.

The two papers that I have chosen to compare for this assignment are the research paper by Elizabeth Coates and the paper by Aldgate and Bradley  in The Reality of Research with Children and Young People Edited by Lewis et al . The paper by Coates involves the observation of children in nursery and reception classes whilst they drew pictures. The paper by Aldgate and Bradley involved the interviewing of children and their families as to their experiences of being in short term foster care (accommodation). Clearly the main difference between the two papers will be the different approaches taken to data collection. More difficult will be the formulation of comparisons between the two papers, however, both authors cited ethical concerns about involving children in research h and this could be one of the comparisons between the two papers, for example were the ethical considerations the same and what conclusions did the researchers come to.

As her research approach Coates used observations.  Observation is often used to collect data; there are different types of observation techniques that can be used depending on the type of research undertaken. Naturalistic observation involves the researcher (or observer) simply observing as a by-stander trying to neither manipulate nor stimulate the behaviour or actions of those being observed. (Introduction to Social Research. Punch pg 184) the situations observed are natural and not set up for the purpose of research. Structured approaches in contrast tend to be very structured and need pre-developed observation schedules. The recording of data can vary video taping, audio taping or the use of field notes are some examples of the methods used in observational research. Coates decided on a Naturalistic approach, she required to undertake her research in schools where pupils had the opportunity to participate in free drawing activities rather than artistic activities under the restrictions of the national curriculum.  The school settings chosen all had free drawing and writing areas where children could come and go freely. Because of the casual and free nature of the sessions Coates had no choice over which children she could observe she merely had a choice from those who chose to participate in activities in the drawing area. In order to minimise disruption to the setting Coates decided to make notes rather than use video or audio recordings.  Coates decided on a qualitative method, principally because there was such a small sample. In consideration of the ethical issues of involving children in her research Coates’ use of note taking as opposed to videoing made it easier to ensure that the children maintained their anonymity, she sought permission to both keep the drawings and to show them to other people from the children in general conversation.

In their research Aldgate and Bradley used interviews to collect data interviews are one of the main data collection tools in qualitative research. Interviews enable researchers to access people’s perception of situations.  Patten (1980) cited in   (Introduction to Social Research. Punch pg 175) distinguishes three main types of interview, the general interview; the informal conversational interview guide approach and the standardised open-ended interview. Generally interviews are either structured with the respondent being offered a selection of pre-established questions, unstructured interviews involve asking the respondent non-standardised open-ended in depth questions. Focus groups or group interviews involves the researcher working with several people simultaneously, rather than an individual. Aldgate and Bradley research was designed to assess the success of short-term fostering care placements in preventing family breakdown. The ethical issues involved in this research were particularly difficult because of the interviewing of children. Permission was needed from parents to interview their children and it was ensured that the children were never pressured to respond and that the children knew that they were free to end the interview at any point.  The researchers had to consider whether it would be better to interview children alone or with their parents present. In the research most children were seen separately from their parents, but each family made its own decision on this point. The methods of collecting data from interviews can vary, for example, video or audio recordings can be made, note can be taken by the interviewer or questionnaires can be used. Aldgate and Bradley opted for a multi-method approach using both qualitative and quantitative data

Although there are many differences between the two research papers, there are also comparisons which can be made between them. The first comparison that can be made is that both sets of researchers used qualitative methods as part of their research. Coates used qualitative methods exclusively because of the small sample of her research. Aldgate and Bradley used both qualitative and quantitative approaches to their research. Both used qualitative data to present their non-numerical data (Coates of course presenting no numerical data thus used solely this method). Coates felt that ethical were highlighted by her use of qualitative data; she had to decide whose permission she needed to seek in order to conduct her research. She also had to ensure that the children she involved in the research understood what was being explained to them about their drawings. Coates used the Head of the setting to explain to the teachers and parents what the research project was proposing to do, and to obtain parental consent.  Aldgate and Bradley also had difficult decisions to make with regards to consent to interview the children targeted by their research. They also had to consider what the children would think about their parents being asked question about them in their absence.  The researchers decided to obtain parental consent to interview   the children without their parents present. Secondly, they decided to tell the children what questions their parents would be asked in their interviews. So broadly speaking both sets of researchers faced similar decisions when it came to the ethical considerations of conducting research with children. A further comparison between the two research papers is that both sets of researchers used unstructured approaches to their research. Coates used a naturalistic unstructured approach in her observations of children undertaking their drawings. Aldgate and Bradley used semi-structured interviews with their families.

The most obvious difference between the two research studies is that they used contrasting methods of data collection. Coates using solely observation. Whilst Aldgate and Bradley used interviewing to compile their research data. Although the two methods are not mutually exclusive and some researcher use a combination of data collection in their research. Another of the striking difference between the two research paper is the about of interaction between the researchers and their research subjects. Coates although needed to interact with the children to a certain extent to gain their permission for her to keep and show others their drawing, she needed to keep her interaction with the children to a minimum during her observations. Using a naturalistic approach to her observations she had to make sure that she did not influence the children drawings by interacting with them whilst they drew. In her commentary she describes her difficulty in not disrupting the setting in order to let the children behave as they normally would. In contrast the very nature of the research paper done by Aldgate and Bradley called for a great deal of interaction between researchers and their respondents. At every stage in their research Aldgate and Bradley needed to interact with their respondents, firstly in gaining parental consent to interview the children, then in explaining to the children what was going to happen and telling them about the questions that their parents would be asked. Of course the most important interaction between the researchers and the respondents took place during the interviews themselves. Another contrast between the two research papers is the scale of the research. Coates conducted a small scale study on children’s free drawing and their self commentary whilst drawing, Coates states that she only collected a small amount of data, which she collected from her observations in three settings. In contrast Aldgate and Bradley’s research paper was a large scale project. They conducted interviews with 60 children, their families and foster carers from four different geological areas.  The time scale of their research was also much longer than that of Coates, with the time between the initial and final interviews being in some cases over nine months.

In conclusion it is possible to both compare and contrast the approach taken by Coates and that taken by Aldgate and Bradley. Although the similarities are smaller they are still there, the use of qualitative methods by both sets of researchers is the main similarity, the ethical considerations they both faced were similar in nature and the structure of there chosen data collection method also bears comparison. The contrasts between the two papers are easy to identify, the difference in approaches the use of Naturalistic observation techniques as opposed to the use of interviews, the scale of the research projects on relatively small scale over a short time period the other a large scale project conducted over many months and finally the amount of interact undertaken by the researchers in the conducting of their research from very little in the case of Coates to a great deal in the case of Aldgate and Bradley of course the nature of the research projects dictated this. Therefore it is possible to find common ground within the two research papers as well as to highlight the many differences.

Coates, E. (2004) “I forgot the sky” Children’s stories contained within their drawings’ in V Lewis, M Kellet, C Robinson, S Fraser and S. Ding (eds) The Reality of Research with Children and Young People, London: Sage in association with the Open University