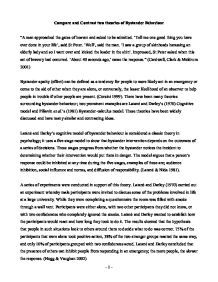 Compare and Contrast two theories of Bystander Behaviour "A man approached the gates of heaven and asked to be admitted. 'Tell me one good thing you have ever done in your life', said St Peter. 'Well', said the man. 'I saw a group of skinheads harassing an elderly lady and so I went over and kicked the leader in the shin'. Impressed, St Peter asked when this act of bravery had occurred. 'About 40 seconds ago,' came the response." (Cardwell, Clark & Meldrum 2001) Bystander apathy (effect) can be defined as a tendency for people to more likely act in an emergency or come to the aid of other when they are alone, or conversely, the lesser likelihood of an observer to help people in trouble if other people are present. (Corsini 1999). There have been many theories surrounding bystander behaviour; two prominent examples are Latan� and Darley's (1970) Cognitive model and Piliavin et al.'s (1981) Bystander-calculus model. These theories have been widely discussed and have many similar and contrasting ideas. Latan� and Darley's cognitive model of bystander behaviour is considered a classic theory in psychology; it uses a five stage model to show that bystander intervention depends on the outcomes of a series of decisions. These stages progress from whether the bystander notices the incident to determining whether their intervention would put them in danger. ...read more.

It was later revised in 1981 to cover both emergency and non-emergency intervention. The Arousal-Cost -Reward theory is a major alternative to Latan� and Darley's (1970) cognitive model; it has been suggested that it is a fine tuning of some of the processes outlined in the decision model by identifying a number of critical situational and bystander variables that help to determine whether the bystander will intervene in various circumstances. However, Latan� and Darley noted that labelling the failure to help a victim in an emergency is too simplistic as it could be concealing other variables and processes. (Hogg & Vaughan 2002) In 1981 Piliavin et al. revised the model and began to consider the influence of a new range of variables, such as bystander personality and mood, the clarity of the emergency, victim and potential helpers and the attributions made by potential helpers and the victims deservingness. Although some of these variables are addressed in Latan� and Darley's (1970) cognitive model, they are not focused on to the same extent. According to Piliavin, there are two major influences on Bystander intervention, the first is arousal, the response to the need or distress of others; this is the basic motivational construct. This component suggests that the bystander feels discomfort and seeks to reduce this by intervention. This component differs from Latan� and Darley's model as it moves away from cognitive processes. ...read more.

Therefore it could be assumed that in both cases the individual will look to others for guidance on how to think and act. This has been shown in Latan� and Rodin's (1969) experiment (Latan� & Nida 1981) and also in the case study of Kitty Genovese case (1964) (Gross 2001). Research has found that not only does the influence of others determine Bystander Behaviour; gender is also seen to have an effect on Bystander intervention. In terms of the arousal-cost component of Piliavin's model, research has suggested that women help only certain people in certain ways (Eagly & Crowley 1986). This could help to explain why some bystanders experience higher levels of arousal than others. The idea of gender could also be applied to Latan� and Darley's cognitive model within the final stage in that women may feel more competent in some situations and therefore are more likely to intervene then men. In conclusion, Latan� and Darley's (1970) Cognitive model and Piliavin et al.'s Arousal-Cost-Reward model have many similarities between them. They both attempt to explain why bystanders intervene in an emergency by using cognitive processes; they also address the possibility of social influences affecting bystander intervention. However a fundamental difference between them is in the cost-reward component of Piliavin's model as it raises the issue of personal gains or costs from intervening whereas Latan� and Darley only address this briefly within stage three of the decision model. Despite these similar and contrasting ideas both theories have had a huge impact on social psychology and continue to generate research. ...read more.

A clear debate with a reasonable level of exploration of the issues and some use of psychological terms. 4*