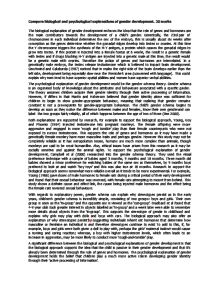 Compare biological and psychological explanations of gender development. 25 marks The biological explanation of gender development enforces the idea that the role of genes and hormones are the main contributors towards the development of a child's gender. Genetically, the 23rd pair of chromosomes in each individual determines the s*x of the embryo, this is usually about six weeks after conception as the genes determine whether the gonadal ridges develop into testes or ovaries. At this time the Y chromosome triggers the synthesis of the H-Y antigen, a protein which causes the gonadal ridges to grow into testes. If this protein is injected into a female foetus at 6 weeks, the result is a genetic female with testes and if drugs blocking H-Y antigen are injected into a genetic male at this time, the result would be a genetic male with ovaries. Therefore the action of genes and hormones are interrelated. In a genetically male embryo, the testes release testosterone which is believed to impact brain development. ...read more.

Also, ethical issues have arisen from this research as it may be socially sensitive and against the animal rights. To support the psychological explanation of gender development, Campbell et al (2000) researched into the gender schema theory. They used the visual preference technique with a sample of babies aged 3 months, 9 months and 18 months. Three month old babies showed a minor preference for watching babies of the same s*x as themselves, by 9 months boys preferred to look at and watch 'boy toys' and this was also true at 18 months. Research to support the biological approach seems somewhat more reliable overall as it tends to be more experimental. For example, Young (1966) gave doses of male hormones to female rats during a critical period of their early development and found that their s****l behaviour was reversed, with female rats attempting to mount from behind. This study shows a definite cause and effect link, the cause being injected male hormones and the effect being the female rats reversed s****l behaviours. ...read more.

and the gender schema theory is determinist because schemas influence what we pay attention to and what we remember, so our gender is determined by our schemas. To add to this, schemas consist of information we're exposed to in our environment so gender is also, to an extent, going to be determined by our environment. In regards to the nature/nurture debate, the biological explanation is in support of the nature side of the debate in that gender development is influenced by genes and hormones and the gender schema theory supports the nurture side of the debate which believes we learn our gender through what it is we pay attention to and remember. The biological approach seems to be more socially sensitive than the psychological explanation because the biological approach assumes that each individual's gender development has already been determined and has implications such as people may feel like they have no control over their gender identity, for example, many mtf transsexuals often describe feels of a female gender identity in their childhood which they could not control. ...read more.

The writer has made some very good points throughout the essay but unfortunately it is rather disjointed and difficult to follow. It would be advisable to plan the essay in more detail in order to give the work structure. For example, it would be better to start the essay by explaining something about the nature nurture debate before describing the biological and psychological approach. Also there should be a brief definition of gender too. The writer needs to use their own words throughout to avoid being accused of plaigiarism.